The Angel refers to one of the NPCs which are part of the «Ring of Angel's Whisper» quest.

The Angel appears to be around the same height as Leafa, she has two wings on her back, and long hair.

Her personality is one that is genuinely cold (and slightly hostile) towards people, though it is said that later on she would show a softer side of herself.  Thus, she is a classical example of a tsundere.

The character was originally created by the Cardinal System's Automatic Quest Generation Function for the «Ring of Angel's Whisper» quest in «Sword Art Online».[1] Some time after the introduction of New Aincrad to ALfheim Online, the angel was imported from Sword Art Online along with the quest.

The angel is said to have been betrayed by humans in the past, which is why she is generally cold to other people. During the quest, she sets several challenges to the players to obtain "eternal bonds".[1]

When the Angel's ring quest was adapted to ALfheim Online, the Angel background was altered: she was revealed to have been a goddess who had disguised herself as an angel in search of eternal bonds.

After logging into ALO, the girls Silica, Lisbeth and Leafa headed to Angel's Rose Garden to start the quest. There they met the Angel, who coldly told them to get a move on and complete the next task.

After reaching the Angel's Rose Garden after battling the huge rabbit monster, Silica, Lisbeth, Leafa and Kuro found the garden destroyed by a giant. After they found a feather, they used it and the Angel appeared, telling them that they had failed the test. She then disappeared abruptly as she was telling them more. 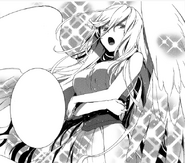 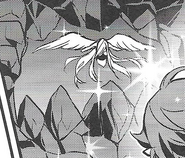