Wiki erstellen
A Beta Tester (ベータテスター, Bēta Tesutā?) is a person who tests a product before it is released. In the gaming world, this term refers to players who are invited to test the game during its beta test period before its official release. As beta testers are not familiar with the game and are more numerous than developer testers are, they are more likely to spot bugs that the developers of the game have missed, as well provide feedback on the game. Beta tests can either be Closed Beta Tests (CBT), where only a certain number of players are invited to try out the game, or Open Beta Tests, where the test is open to the public without an invitation.

The Sword Art Online beta test was conducted over the summer vacation. It was said that 100,000 people, the number of half the NerveGear sold at that time, volunteered to be beta testers of Sword Art Online,[1] however, the beta test only recruited a thousand testers.[1] The beta period lasted until the August 31, 2022 and the beta testers managed to reach the 10th Floor by the end of the beta. Beta testers also received the additional benefit of being able to pre-order the game,[1] but, as the release date for Sword Art Online was close to the examination week, only around 700-800 players are estimated to have migrated to the official released.[2]

With the beginning of the official service of the game, the accounts of beta testers were reset, though they were able to inherit the appearance of their beta test avatars, until the avatars of all players were changed to match their real life appearance. Because of this and the fact that beta testers have no special identification cursors, the only ways to identify beta testers are to either have met or heard about them in the beta test, or by their actions. The only advantage that beta testers had over regular players was the information about the game, its quests, best farming locations and other useful details they learned during the beta period.

During the first months of Sword Art Online's official service, beta testers were regarded with significant hatred. It was commonly believed that the beta testers abandoned the new players within the first few days of the official service, refused to share important information and instead monopolized the best quests and monster spawning spots out of selfishness. The first 2000 deaths of SAO were blamed on the beta testers. The tension between the beta testers and new players was so strong, that by the third week no player would dare reveal themselves as a beta tester. Those that did suffered the threat of being PKed or lynched by angry mobs. At best, known beta testers were alienated and ostracized from guilds, towns, restaurants, etc. For this reason, Argo always refused to sell the identities of any beta testers.

Contrary to popular belief, not all beta testers were selfish. For example, Argo published special free-edition guides to new players to help them learn the basics of the game. The guide also has useful information on monsters, maps and other things. Only advanced players had to pay the usual price for their copies of the guide to support the free edition.

Moreover, according to Argo's research, around 300 beta players died during the first month; percentage-wise, the death rate of beta testers was close to 40%, while the death rate of new players was only around 18% - only about half of the beta tester death rate.[2] Such a tendency is explained by the fact that not only did their beta test experience not guarantee safety, but it occasionally led to their downfall, as, although the topography, monsters and items were mostly the same as in the beta, there were slight changes in the official version of the game, like a monster having a hidden lethally poisonous needle, which it did not have in the beta.[2]

During the 1st Floor Boss battle, as Illfang the Kobold Lord's weaponry and attack patterns differed from the beta, while the raid party relied on Argo's published beta test version of information about it, Diavel was killed by the monster while attempting to obtain the Last Attack bonus. Because of this, the hatred for beta testers resurfaced and threatened to go out of control. At this point, Kirito decided to end the tension between beta testers and regular players by claiming that a majority of beta testers were inefficient and incapable players, while only a select few of the beta testers (like Kirito himself) knew even more secrets to SAO than typical information brokers and beta testers did. In the aftermath of this proclamation, the term «Beater» was formed to refer to those beta testers who abused their knowledge of the beta test for their own advantage and, as a result, much of the enmity on beta testers was transferred to Beaters, and Kirito helped ease the burden on the beta testers. 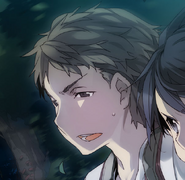 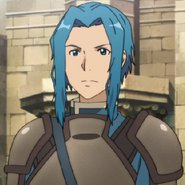