Kirito and Eugeo are now second years at the Sword Mastery Academy and placed fifth and sixth in the top twelve. One day they are requested by their valets to help another valet who is being made to do embarrassing tasks. They break the Taboo Index and, consequently, are arrested by Alice, who is now an Integrity Knight, and sent to the Axiom Church prison. In prison, the two boys realize that they can break out but are intercepted by the Integrity Knight Eldrie Woolsburg.

Eugeo recalls the events that led to the current time, including his and Kirito's surprise to receive female valets. After Ronye and Tieze leave the room with the bag of honey-pies given to them by Kirito, Kirito asks Eugeo if he'd like to practice. Eugeo informs him that they'll soon have tests, and that Kirito should study for that. Admitting to this, Kirito decides to cram his studies, and asks Eugeo to retrieve him some food from the cafeteria later. Eugeo decides to go to the Training Hall, but found that two students had also occupied it, Humbert, and Raios, who had in the past harassed Kirito and Eugeo for being commoners.

Eugeo decides to ignore them, despite their attempts to annoy him. He decides to strike a practice log, while considering words of Kirito, regarding the strength of one's sword. He claimed that the style that Raios and Humbert use draw power half from their own strength, and half from their bottomless pride. After finishing his practice, Wanbell mocks Eugeo's lack of a form, and offers to teach him proper form. Rather, Eugeo accepts his lesson in the form of a practice match. After a struggle to overpower one another, Eugeo barely manages to disarm Wanbell, before Rainos calls the match a draw. Eugeo contemplates the strength he saw behind Wanbell's sword, and wondered what he could use to "put into his sword."

Days later, Kirito and Eugeo take their valets to the forest, while eating lunch they ask for their help, they explain that Humbert has been requesting strange things from his valet, who's Ronye and Tieze's friend, to the point of making her cry all night long. Eugeo decides to take action since he felt that it was his fault for fighting Humbert, and with Kirito, they visit Humbert and Raios' room to talk to them, they play dumb and act as if they haven't done anything bad. The next day Tieze enters Eugeo's room after she finished the cleaning and tells him about her dad's intention in allowing her to enter the Swordmanship Academy to rise her family status and asks Eugeo to marry her if he doesn't win the Four Empires Tournament and Eugeo agrees.

The next day, while Kirito and Eugeo are in their rooms cleaning their swords, they notice that Tieze and Ronye have yet to arrive at their rooms, as they normally do. Kirito decides to hurry to the trainee dorms, by rushing out the window, and has Eugeo wait in the room, in case they return. After waiting for some time, Frenica, Humbert's valet whom he had humiliated before, came to Eugeo's room. She thanked and apologized to him. She told him that Tieze and Ronie had headed to Humbert's and Raios' room, earlier that day. Eugeo asked Frenica to stay there, in case Kirito returned, and hurried to Humber's and Raios' room. He realized he'd taken his sword, but decided there was no time to go back and leave it.

Upon arriving, he was greeted by Raios and Humbert who seemed drunk. It's not long before they reveal to him Tieze and Ronye, tied and bond in their bed. As it turned out, they knew Frenica was friends with Tieze and Ronye, so they expected Frenica to cry to her friends, and them in turn, tell Kirito and Eugeo about her ordeal. As they expected, after Kirito and Eugeo's confrontation with Humbert had no effect, Tieze and Ronye went to confront them and lose their composure. This was what they wanted, so that they could use their rights as upper Nobles to punish the lower nobles, they wanted to apply punishment through raping them. They waited for Eugeo to arrive, so that he could watch in horror.

As they began to violate, Eugeo came into conflict with himself, and every time he wanted to stop what was happening, his right eye began to hurt. He eventually moved, and swung his sword at the two. Raios was fast enough to move out of the way, but Humbert's left arm was severed. As a result, Eugeo's right eye was blown away, and all he could see through that eye was a red "Error" message (which was in English, so he couldn't understand it). Raios was amused that Eugeo broke a Taboo, and managed to calm Humbert, who was panicking without his arm. He told him to use two of the ropes that held Tieze and Ronye down, to tie up his wound.

Eugeo was in shock, having collapsed after swinging his sword, and losing his eye. Raios grabbed his sword, and told Eugeo, that as a criminal, he is to be killed by him. Before he could strike, Kirito came in and stops the blow. Raios told Kirito that Eugeo is a criminal, and cut off Humbert's arm, and Kirito exclaimed that he didn't care about taboos or the nobles' authority to judge. The two fight, and the result is both of Raios' arms being cut off, while holding his sword. Raios panics, as his Life drains away, and dies before Kirito manages to save him. Humbert, in fear and panic, runs out the room, calling the duo murderers and monsters.

The two untie the girls, and comfort them, before a face with unidentified gender appears from something like a Stacia Window and mutters something about their location, but they are unable to understand it.

The next day Kirito and Eugeo are in the underground discipline chamber, where Dormitory Supervisor Azurika visits them, she cures Eugeo's eye and tells them farewell words before taking them to the practice arena, where their escort is waiting to take them to the Central Cathedral, in the way they see a dragon, so Eugeo knows that their escort is actually an Integrity Knight.

With resolution Kirito enter the arena, followed by Eugeo, they present themselves to the Integrity Knight and it presents itself as Alice Synthesis Thirty. Eugeo recognizes his childhood friend and calls for her, but when he tried to touch her, she removed her scabbard from her sword belt, using it to hit Eugeo across the cheek, and warned that if he tries to touch her again, she'll cut off his hand. Kirito makes Eugeo enter back in composure and both are taken to the plaza where the dragon was waiting.

Alice binds them with chains and leather belts, restraining their moves. In that moment Tieze and Ronye appear with Eugeo's and Kirito's swords and ask Alice if they can return them. Alice takes the two swords and let them talk with Eugeo and Kirito. Each one approaches their mentor. Tieze promises Eugeo that she'll become an Integrity Knight and save him, while Ronye gives a bento to Kirito. Alice sits on the saddle and makes the Dragon rise and takes Eugeo and Kirito to the Axiom's Church Central Cathedral.

In the «Ocean Turtle», Asuna ascends some stairs to visit Kazuto and remembers all the times she had climbed stairs like those in Aincrad with Heathcliff and Kirito. While thinking, she encounters a robot descending the stairs. Higa appears along with Rinko and introduces the robot as Ichiemon. After saying their greetings they return to the laboratory.

Back in the lab, Rinko and Higa explain to Asuna about the robot Ichiemon and about how is it part of the Alicization Project. Rinko takes Asuna to eat breakfast, in the way Asuna sees two males from Rath staff, but gets a bad feeling from them. Rinko asks what's the matter, but Asuna answers that it's nothing and they continue their way.

Chapter 6 (The Knight and The Prisoner, 5th Month of Human World Calendar 380)Bearbeiten

Eugeo and Kirito are being held in a dungeon at the Axiom Church's Central Cathedral. There Eugeo and Kirito begin to inspect the chains that are holding them and realize that they can break them with their own strength. Kirito breaks the bars using the whip techniques that Sortiliena taught him and finds the jailer sleeping despite all the noise they caused.

Eugeo and Kirito climb a set of stairs and find themselves in a maze created with bronze fences, and even more amazing, filled with roses. They use Sacred Arts to locate their swords, but on their way to retrieve them they meet another Integrity Knight, who presents himself as Eldrie Synthesis Thirty one and explains that Alice told him to wait there because she knew that they'll escape. Kirito start facing the Knight just to be overwhelmed by his weapon and speed at chanting spells. Kirito turns to his partner and both begin to fight the Integrity Knight without their swords. Kirito manages to approach Eldrie, but in the last moment, the whip he was using separates into two and strikes both of them, taking advantages of apparent openings from Eldrie. Eugeo and Kirito take chances one after another to attack, but they're fruitless, until Kirito manages to enter a Stalemate.

Eugeo jumps in a surprise attack, but Eldrie uses his last resource the Release Recollection command and his whip transforms into a snake, which stops Eugeo. On the floor Eugeo recognizes him, and with Kirito's insistence, they make him enter a state of shock by reminding him of his memories, which were sealed by a strange prism that was now protruding from his forehead, from his life before becoming an Integrity Knight.

After Eldrie falls, they are attacked by another Integrity Knight, this one using a red bow, from its dragon. Kirito and Eugeo run through the maze into the plaza of the cathedral. Kirito hears a voice that guides him to a door, where they enter and manage to escape from the air attack.

After they cross the door, they find themselves in a strange hallway and a mysterious person is with them. She prompts them to follow the hallway until a strange room with more hallways, all of them disappear. The person resulted to be a girl, but looked like a scholar. She takes them through another door, which takes them to the Great Library Room. The girl introduces herself as Cardinal, and makes food for Kirito and Eugeo and tells them that they can read as many books as they would like, but they must first recover from the previous battle. Kirito sits to eat while Eugeo takes a bath to prevent catching a cold. Kirito talks to Cardinal, and as he imagined, she was the embodiment of the Cardinal System. She takes Kirito to another room, on the way, he realizes that she wants to talk stuff that Eugeo must not hear.

In the new room she tells Kirito about the story of the Underworld, how it came to be, how the Feudal System was implemented and reveals to him the real story behind the Taboo Index, the Axiom Church and its founder Quinella. During the story, Kirito realizes various things, but also learns that the Cardinal before him, doesn't possess the authority over this world as the other Cardinal Systems do over other VRMMO. 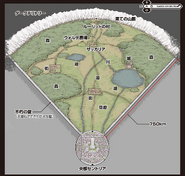