Kirito and Eugeo attacked each other with «Sonic Leap», although Kirito used some tricks to make his move faster and stronger, Eugeo managed to match him, making Kirito realize all the extra hours of training Eugeo had. Kirito tried to talk with Eugeo, but he remained silent, while Kirito decided to fight seriously, he also thought about which memories had been stolen from Eugeo.

Both skills ended at the same time, and after the rebound, both swordsmen used the same moves. During the clash, the blades got entwined again, and Kirito exposed his thought about fighting Eugeo seriously during their trip to Centoria. After a while, Kirito fell backwards and, although Alice thought he had lost, Kirito was actually activating the Martial Arts skill «Crescent Moon», aiming to kick Eugeo on his jaw, but the latter decided to use his sword's pomel to misdirect Kirito's attack. Kirito slowed down his kick and instead, kicked Eugeo's hand and sent the Blue Rose Sword flying, ending up stabbed into the ceiling.

After Eugeo burst five aerial elements to get some distance from Kirito and be able to retrieve his sword with an incarnation arm, they engaged in another scuffle, during which Kirito managed to make Eugeo remember who he was once again, but because of the Piety Module, Eugeo could only apologize to Kirito and Alice before releasing the recollection of the Blue Rose Sword unwillingly.

After temporarily binding Kirito and Alice in ice, Eugeo went to the Administrator's room alone. There he first managed to send Chudelkin to the now frozen in place Kirito and Alice with a lie, and decided to face Administrator alone. After Eugeo met Administrator, she confirmed that the Piety Module inserted into Eugeo was unstable and tried to reinsert it properly while paralyzing Eugeo. When instructed to repeat the «remove core protection» art though, Eugeo instead forced his arm to break free from the paralysis and he attempted to stab Cardinal's dagger into Administrator. However, Administrator had a Sacred Art protecting her body from metal objects, thus this attempt ended up in causing an explosion that pushed Eugeo away. Eugeo then attempted to stab her with the Blue Rose Sword. After a surprising phenomenon between the Blue Rose Sword and the barrier breaking, Administrator hurriedly pushed Eugeo against the wall with a Sacred Art. Eugeo then went into a defensive stance, just when Chudelkin ran into the room, tailed by a now thawed Kirito and Alice. 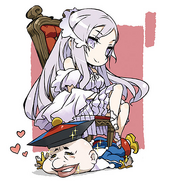