Upon returning to the city Kirito and Asuna witness a murder within the city, an anti-crime prevention area. A man thrown out of a window while impaled by a spear, dies right before their eyes. Both are bewildered as they try to find a normal cause for the murder, but none appears so they find themselves starting to investigate a murder case. First they interview a witness, a girl, Yolko, who was supposed to meet up with the victim, Caynz. They also retrieve the murder weapon, Guilty Thorn, which they take to Agil to find out more about it. After Asuna and Kirito call it a day, Schmitt from the Divine Dragon Alliance shows up with a group of people from his guild and robs Kirito of Guilty Thorn. The next day, Asuna and Kirito pay Schmitt a visit; he was willing to assist them as long as he was able to talk to Yolko again. Yolko is suddenly murdered during the conversation and Kirito attempts to capture a hooded man on the roof. Schmitt gives Kirito a list of names of the members who were part of the «Golden Apple» guild. Kirito realizes that the real perpetrator was actually the spouse of the dead guild leader of the Golden Apples. He had been after a ring that granted amazing bonus stats that could sell for a lot of gold. Schmitt feels guilty for being an accomplice in the death of the guild leader and decides to visit her grave only to find Yolko and Caynz still alive. Kirito explains that Caynz and Kains were similar names when spoken and that Yolko had lied to both him and Asuna. Three members from the killing guild «Laughing Coffin» show up at the deceased guild leader's grave and attempt to kill Schmitt, Yolko, and Cayne. Kirito steps in to save the day. Asuna catches Grimlock, the spouse of Griselda, hiding in the bushes. He admits that he was the mastermind behind the death of his wife; he did not want her personality to change from what it was originally in the real world.

The quest to retrieve «Excaliber» from the base of Jötunheimr was revealed to the public. However, unlike how Kazuto (Kirito) and Suguha (Leafa) expected, it was not a quest to clear the Inverted Ice Pyramid, but another quest to slaughter all beast-type Evil Gods and the sword had yet to be obtained. After Kazuto and Suguha called Asuna, Shino (Sinon), Ryoutarou (Klein) Keiko (Silica) and Rika (Lisbeth) to form a party of seven to attempt raiding the ice pyramid again, they gathered at Lisbeth's shop in Yggdrasil City to prepare and then came to Jötunheimr via a secret passage that Kirito and Leafa had found nearly a year before. There, they called Tonkii to transport them to the dungeon, but the creature instead took them downwards, until they were able to clearly see what was happening on the ground, where they saw players co-operating with the humanoid-type Evil Gods to wipe out the beast-type Evil Gods. At that moment, an NPC calling herself «The Queen of the Lake», Urðr appeared. She told them of a once beautiful Jötunheimr where the roots of the World Tree touched the floor and the endless void in the center of the land was filled with water of the purest quality. The Frost Giants had used the «Holy Sword Excaliber» to cut off the roots of the great tree and this resulted in Jötunheimr turning into a frozen wasteland. After telling that the quest to slaughter the beast-type gods would result in the humanoid-type Evil Gods to invading Alfheim and would reward a «Fake Sword Caliburn», instead of the real Holy Sword Excaliber, Urðr requested the fairies to enter inverted ice pyramid dungeon, called Þrymheimr, and retrieve the real sword from a plinth to return Jötunheimr to its former state before the beast-type gods are all slaughtered. The party then entered the upside-down pyramid to clear its four floors and obtain Excaliber.

Along the way, at the end of the third floor, they run into Freyja, a captured beauty, and rescue her. During the battle with the final boss, Giant King Þrym, Freyja transforms into the God Thor after retrieving his Mjölnir, the lightning hammer. After defeating Þrym, the group heads into a narrow staircase and finds «Excaliber». After much effort, Kirito pulls the blade out while the fortress begins to collapse. While falling, Tonkii saves the group but to Kirito's dismay, «Excaliber» was lost. Suddenly, Sinon sends a retrieval arrow towards the blade and has Kirito swear that he would think of her every time he uses to sword before giving it to him. They are then met by Urðr and her sisters to receive the reward for completing the request. The group is loaded with treasure and then decide to log out and have a party at Agil's cafe.

As the SAO death game begins, Kirito rushes to the village named Horunka to get a headstart on the quest which will reward him the «Anneal Blade» which is strong enough to last him for the first 3 floors. During his quest, Kirito finds another beta Tester like him. Coper, who proposes that they try to complete the quest to obtain a new sword together. After Kirito gets the item needed to complete the quest, Coper purposely activates a trap which releases a horde of monsters. Kirito realizes that Coper was trying to kill him. After a tough fight, he manages to escape but Coper dies; this heavily affects Kirito as he realizes he can die in this game. Kirito returns and completes the quest, in the scene after he remembers his sister Suguha. 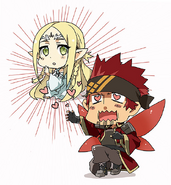