After thwarting the would-be ambush, Kirito and Leafa set out for Alne, towards the World Tree, only to be sidetracked by an event and end up in the underworld, «Jötunheimr». With some help from an unlikely ally, they reach the city only to find that the way to the World Tree is locked. In the end, Kirito saves Asuna. Several months later, they, along with other Sword Art Online (SAO) players begin attending a special school for SAO survivors, and play ALfheim Online, but with a new feature added to the game, New Aincrad. Kirito vows to complete all 100 floors as they all fly towards the castle.

Looking high above you can see the land and the sky from the underworld «Jötunheimr»; introducing the undergrounds of the fairy world, a dark world of ice and snow, dominated by dreadful Evil-God-class monsters.

After the tiring event, Kirito and Leafa asked each other on the next course of action, when suddenly the «Beast-type» monster reappeared before them but not out of hostility. Yui suggested that this "child" did not mean any harm to them. After realizing that it wanted to carry them on its shoulders, the «Beast-type» monster gently picked them up with its long nose and place them on it back. Swimming around the lake. Upon approaching a big void, the «Beast-type» monster seemed to stopped and did not move. Surmising that might be the end of its journey, Kirito and Leafa decided to find the exit to the upper world, only to be suddenly interrupted by a group of Undine players that were hunting in the dungeon. After being forced aside so the group could kill the evil-god-class monster, Leafa again felt pity on the creature, as it had attempted to help them find a way out of Jötunheimr. Kirito then affirmed Leafa's feelings and decided to help the monster by attacking the hunting group. One by one, first targeting the mages on the back row, Kirito and Leafa managed to defeat 5 players before being overwhelmed by the hunting party until suddenly the «Beast-type» monster let out a huge shout and it began to light up. Soon the water-based «Beast-type» monster sprouted wings and let out a high-class magic, Dispel Field. After overwhelming the hunting group it returned to where Kirito and Leafa were and offered another ride, this time flying around Jötunheimr. Its flight path circled them around an inverted pyramid hanging at the top ceiling of the Jötunheimr just below the World Tree roots. Kirito and Leafa then noticed a shining object, after seeing it, Leafa confirmed that it is the Legendary weapon know as «Holy Sword Excaliber». But since they figured that it would be impossible for the two of them to obtain it at the moment, they decided to keep this location a secret and come back for it another time. After leading them to spiral staircase, they bid farewell to their new friend «Tonkii» and proceeded up the staircase to Alne City.

After the long tedious task of secretly memorizing the long digit pass-code, Asuna unlocks the door and attempt her escape from her imprisonment from Oberon. Exiting from the golden cage, she finds herself in a secret laboratory where Nobuyuki and his subordinates perform their illegal experiments with the trapped minds of 300 players captured during the collapse of Sword Art Online.

Despite being carefully quiet to not get noticed, she was caught right before she can escape through the exit in front of her. Despite her struggle, she was soon brought back to the golden cage and is now more secure than before; however she was able to steal a silver key card from one of the subordinates. As the pass-code has been changed, she patiently rests until another opportunity arises.

Back at the real world, Kazuto and Suguha spend the morning improving their sibling relationship. Later, they both travel to the medical institute to meet the sleeping Asuna; as Suguha watches her cousin Kazuto, she finally realizes how she felt about him. After returning home, Suguha activates her AmuSphere and resumes her online life as the Sylph warrior: Leafa.

Finding herself at the inn of the Alfheim's capital city «Alne», she met with the Spriggan Kirito and they made their way to the World Tree. When they arrived in the central district, Yui told Kirito that she felt Asuna's presence, and they flew to try to meet her in their excitement. As the system would not allow them to pass a certain point in the air, they were forced back. However Asuna felt the voice of her daughter and tossed them the silver key card she had stolen from one of her imprisoners. After obtaining the key card, Kirito parted ways with Suguha and left with Yui to the gate that lead into the World Tree.

Accepting the challenge of the guardians who protect the passage, Kirito fights his way towards the goal. The odds were against Kirito; he was defeated and left in his End Frame, however he was soon revived and rescued by Leafa. Ignoring Leafa’s warnings, Kirito was still persistent in continuing the impossible challenge, and he suddenly spoke Asuna’s name. Leading to the discovery of each other identities; the Spriggan Kirito as Kirigaya Kazuto and the Sylph warrior Leafa as Kirigaya Suguha.

After learning the truth, Suguha was in heartache. She logged out of the game and isolated herself in her room. When her cousin Kazuto tries to confront her, she finally tells him everything about how she felt about him; afterwards she closes the door between them and sat by herself. After contemplating for a period of time, Kirito left Suguha a message telling her that he will be waiting for her in Alfheim.

Suguha returns to Alfheim, and while considering whether to meet her cousin, she met her old companion Recon, the game persona of her classmate Nagata. He helps Suguha made up her mind and with his help, she left to meet Kirito. Upon their meeting, Suguha asks Kirito to another duel, which ended in a tie as both dropped their weapon at the last final moment. In the end, Kazuto apologizes to Suguha for the pain he had caused her.

With the assistance of Leafa and Recon, Kirito re-challenges the guardians; during the difficult battle, Recon performs a self-sacrifice move. They were later supported by the Sylph Lord, Sakuya, the Cait Siths Lord, Alicia Rue, the Dragon Knights and a large player group with ancient weapon class. With their help, Kirito was able to make it to the goal. Still followed by the guardian knights, Kirito quickly uses the silver cardkey he obtained from Asuna. While holding onto Yui, they both teleport into the gate. After they land, Yui returns to her state as a 10 year old girl, Kirito follows Yui’s directions to the golden cage, and they finally reunite with Asuna.

Oberon interrupts the couple’s meeting, and uses his power to immobilize Kirito and Asuna, however Yui was able to escape. After Sugou pins Kirito to the ground with his sword and alters his pain receptors, he began tormenting Asuna. When the situation was looking grave, Kirito receives an unexpected help by the voice of Kayaba Akihiko. After removing his sword that had restrained him, he accesses the system and under the ID of Heathcliff, he gains the controls as the system administrator and seal Sugou from using his power. Wielding his black sword, he challenges Sugou to the match; which Kirito won and inflicted great pain onto Sugou; slowly hacking him into pieces until he disappears. Afterwards Kirito finally freed Asuna from the game, and then spoke with a digital image of the former Kayaba. Kirito was then given the «World Seed» program before he left.

Kazuto met Suguha in his room when he returns back at the real world and gave her his sincere gratitude. He quickly left on his bike into the snowy night and was on his way to meet Asuna; however he soon encounters Nobuyuki with a knife. Using the experience he had acquired from the game, he defeated Nobuyuki and restrained him at the parking lot. After entering the medical institute, Kazuto told the receptionists about Nobuyuki. Afterwards, Kazuto took one of the guest pass cards and finally reunited with Asuna.

Kazuto and Asuna were back together, and were having lunch outside of their school. Both attended the special school made for the student players from the «SAO» event. However, the Player killing «Orange Players» were being treated in counselling and were under observation. Kazuto and Asuna talked about the following events, about Asuna's father, Nobuyuki's sentence, the future of VRMMO, and also about Kayaba Akihiko, whose death became clear to the public on March 2025. Kazuto had met with the female graduate student who had helped Akihiko: Koujiro Rinko, and learned about Akihiko's aims: scanning his brain and storing his memories and thoughts as digital codes into the network.

Watching the couple from afar, Shinozaki Rika (Lisbeth) and Ayano Keiko (Silica), were sitting near the windows on the west side of the cafeteria. Once Kazuto had told Rika about the «ALO incident» and what had happened to Asuna, she and Keiko formed the alliance with a «One Month Truce» to allow Kazuto and Asuna to spend time together, which Rika was now regretting.

Along with Asuna and Suguha, Kazuto attended the party at the «Dicey Cafe», which had been reserved for the off-line meeting of the «Aincrad Capture Commemorative Party»; planned by Kazuto, Rika and Andrew (Agil). Watching the occupied table of Asuna, Rika, Silica, Sasha, Yulier, Suguha and the other female players, Kazuto met up with Ryoutarou (Klein), and Thinker, who was now married to Yulier.

With the help of Akihiko's female assistant, Rinko, as well as Yui and Andrew, Kazuto had uploaded the «World Seed» program, called «The Seed», to public servers, allowing anyone with a sufficient server to download the free package, and design a new VR game world in their preference. In addition, «The Seed» program could also be used for education, communication, tourism, and so on.

Afterwards, there was a second party in Alfheim; the game «ALfheim Online» was now back, operating under a new company. Deciding that the role of the «SAO» Kirito was finished, Kirito started a fresh new version of the «Spriggan» Kirito. To Leafa's surprise, when her cousin led her to the meeting place of all their friends, there was a new addition to the game: the rebirth of the floating castle «Aincrad». 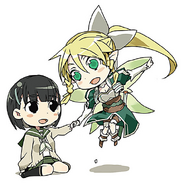