Die Geschichte beginnt in dem «Labyrinth des first floor(erste Ebene)» Am 2. Dezember. With Kirito witnessing a female Solo Player named Asuna overkilling a level 6 armed beast-man monster: «Ruin Kobold Trooper» with continuous use of «Linear». After watching the monster disperse into fragments; Kirito approaches the girl to ask about her risky battle style. Learning that it was her first time playing a MMO game, Kirito soon felt the need to teach her and answer her questions on some common knowledge in the SAO game. Afterwards, Asuna decided to end the conversation with Kirito as the monsters were going to re-spawn soon. Asuna was soon overwhelmed by fatigue and almost collapsed on the dungeon floor, however Kirito quickly intervenes and transports her outside the dungeon from harm’s way. After Asuna had finally rested on the grassy field, she wakes up and notices Kirito who saved her; she responded to him by stating that saving her was an "Unnecessary Effort".

After Asuna reminisced about how her old ordinary life changes when she borrowed the «NerveGear» from her older brother: Yuuki Kouichirou. Kirito notifies Asuna about the upcoming meeting for the boss raid at the town called «Tolbana». Arriving at Tolbana’s northern gate, Kirito momentarily part ways from Asuna after telling her the time and place of the meeting. Kirito soon met up with «Argo the Rat»; Aincrad's first informant and recognised by the painted whiskers on her face. Within the 2 hours of the meeting, Kirito learns from Argo that the buyer of his «Anneal Blade+6» had raised his price to 29,800 «Col»; however, Kirito again refuses the offer and wonders why the Argo's client was so persistent.

Once Argo had left, there was still time before the meeting began. So Kirito met up with Asuna as she was having lunch by the fountains at the town centre. When the meeting for the boss raid had finally began, 44 players including Kirito and Asuna had gathered by the fountain. A self-claimed knight, called Diavel, appears amongst the crowd, and announced that the boss’s room in the dungeon have been located. During his speech about the slow advance of the game, a young man named Kibaou interrupts the crowds’ cheer. He demands an apology from the unknown Beta Testers, however a tall man name Agil approaches him and shows that the Beta players should not be fully blamed as they had also helped by distributing knowledge in the game. When the commotion had ended, Diavel finally finishes his encouraging speech about everyone working together.

Due to the efforts of Diavel’s clearing group, the boss had been revealed as «Ilfang the Kobold Lord» along with his re-spawning minions: «Ruin Kobold Sentinels». As the boss raiding party later receives the free information from the NPC shop of «Argo's Strategy Guide: First Floor Boss edition». There were soon seven parties with different purposes: 2 Heavy-Armor Tank parties, 3 High-movement attacker parties, 2 Long-Weapon Support parties. Whereas the left behind players; Kirito forms a partnership with Asuna and were assigned to rear guarding in the support group (E group).

After the meeting has disbanded, Asuna stayed over at Kirito’s rented room at the 1st Floor farm to use the bath. Soon afterwards, Kirito was visited by Argo and paid the fee to learn that the client was Kibaou, who once again raised his price for Kirito’s sword to 39,800 Col. While Kirito was wondering if his reputation as a beta player was exposed, Argo went to use the bathroom and unfortunately for Kirito, she met Asuna.

The boss raid finally commences on December 4th and during the fierce battle, Diavel received a deadly 3-hit combo from the boss and dies in front of Kirito. In Diavel’s last moments, Kirito finally realized that the self-claim knight was also a Beta Player and also the true client who was trying the hinder him by purchasing his «Anneal Blade»; his motive was to prevent Kirito from performing another Last Attack move against the bosses like he did from the Beta version. Diavel wanted to perform the last attack and obtain its bonuses for his own survival, and he thought that Kirito also wanted the «Last attack bonus». After Diavel’s body shatters into the blue fragments, Kirito performs Diavel’s last wish in dealing the Last Attack against the boss; with Asuna and everyone’s cooperation; he succeeded and thus obtaining the rare boss item.

Everyone was celebrating as the first floor was finally cleared, however the atmosphere soon changed when Diavel's part member, the scimitar user Lind, reminded everyone that their leader Diavel had died. To deal with growing anger against the Beta Players, Kirito made the bold decision to direct all the anger onto him by announcing himself belonging to a new category known as «Beaters» (Beta Tester + Cheater); a player who uses future knowledge to benefit himself in the SAO game from its previous version.

After flashing the victorious boss item: «Coat of Midnight» to everyone, Kirito left them all behind in their discontent, with only Asuna and Agil understanding what he did, and passes through the gate of the 1st Floor as the first known «Beater» in SAO's history. Kirito was soon followed by Asuna, who met up with him to show her gratitude, as well as to relay 2 worded messages from Agil and Kibaou. After parting with Asuna once again, he later received a message from Argo about his infamous speech and tries to compensate him for the trouble she caused; by allowing a onetime free offer of any information, Kirito mischievously replied by asking for the meaning of her painted whiskers. Afterwards, he approaches the main city of the 2nd Floor: «Urbus».

Kirito had just opened the gate of the 2nd Floor of Aincrad. While hiding from the players entering through the gate, he saw Argo running from some guys. Kirito decided to follow them and, after catching up with them, identified that the players were part of a guild from the Beta test period that simulated being ninjas.

After tailing them to an area outside of the Anti-Criminal Code Effect Area and noticing that the two were trying to force information out of Argo, Kirito stepped in. After a short conversation, during which the two "ninjas" mistook Kirito as a member of rivaling guild, a monster attacked the two ninjas, forcing them to run off. Argo thanked Kirito and he told her that he wanted to know the reason behind her whiskers. She instead decided to give him information on the extra skill hidden on that floor.

She took him to a hut in the mountains of the 2nd Floor, where an NPC was waiting for a disciple. Kirito accepted the quest, and, after the NPC took him out of the hut and told him that he had to break an indestructible-looking rock with just his palms, the NPC painted his face, telling him that he would not be able to take off the paint until he breaks the rock. That is when Kirito realized that Argo had tried to do the quest during the Beta period, but had not able to clear it, thus she kept the whiskers.

Kirito then asked Argo whether his paint was similar to hers, hoping that if it was not noticeable or looked cool, he could still have a choice of returning to his daily life with it. But, as Argo described his appearance as «Kiriemon» (Kirito + Doraemon) and started laughing uncontrollably right afterwards, Kirito secluded himself at the mountain for three days until he broke the boulder and cleared the quest, obtaining the Martial Arts extra skill.

Rondo of a Fragile BladeBearbeiten

Upon clearing the 1st Floor, Kirito went on the run as the first person ever to be called a Beater. He arrived at the market place to see one particular person complaining about a failed upgrade to his sword. He later found Asuna, who also wanted to upgrade her rapier, so Kirito accepted the challenge to help her collect the materials needed to enhance it.

Asuna took Kirito to hunt wasp monsters. Since they needed to kill 100 of them, she challenged Kirito to see who could kill 50 of them faster. Being overwhelmed by Asuna's ability to connect critical hits, Kirito started using his Martial Arts skill, once a secret, to regain some terrain, but in the end he lost to Asuna by one monster, so he had to treat her to dinner.

While looking for a place, Asuna selected one that Kirito knew very well. It had the most expensive dish in the game yet, and she ordered it. The cake was delicious and Asuna told him that the information was provided by Argo, and teased to ask her about Kirito's information, to which Kirito responded by saying that he'll do the same, but Asuna misunderstood.

After an awkward moment, they finished eating and exited the restaurant. While walking, they noticed a new luck buff from the cake they just ate. While thinking about what to do, Kirito decided to take Asuna to the blacksmith and try upgrading her Wind Fleuret. She gave the blacksmith Nezha the materials needed and the Wind Fleuret. Kirito and Asuna crossed their fingers and the success rate increased to 97% and the process started, but at the last moment the Wind Fleuret broke into a thousand polygons. Asuna was rendered speechless and Kirito asks Nezha what happened. He explains that when the game was released a new penalty was added, Weapon Disappearance.

With tears in her eyes and an empty mind, Kirito took Asuna to a bench where he offered to buy a new rapier in another city. Asuna declined, and he took her to an inn where he waited for her to check and enter her room. Then he decided to investigate and followed Nezha to a bar.

In the bar, Nezha reunited with some friends, who congratulated him, while he informed them of the items he got that day. Kirito thought of something, but one of Nezha's friends detected him and tried to follow him. Kirito managed to escape with his hiding skill, then he checked the time, and ran towards the inn in which Asuna was staying. He abruptly entered into her room and told her to materialize all her items and gave her instructions on how to do so. He started looking in her pile of items and at the bottom he found her Wind Fleuret.

Asuna received the Wind Fleuret as things calmed down and Kirito explained the methods to lose a weapon, the items property and the Objectize All function in the Menu. Asuna decided to thank him, as she was about to hit him for entering her room so abruptly, but she was happy over recovering her beloved weapon.

The next day they headed out to the field and encountered two parties formed from members from the 1st Floor boss raid fighting a field Boss and other 3 waiting in the back. After an abrupt change of events, one party was in trouble and one of them, named Orlando entered the action wielding an Anneal Blade.

After the battle, the two parties returned to the town and Kirito and Asuna took the opportunity to enter the dungeon, as a Beta Tester, Kirito knew the location of almost all the chests and, with Asuna, they were making enough profit. Asuna sensed that the Minotaurs' clothes were sexual harassment, so Kirito, who was about to use an item that looked like them, decided to give the item to Agil the next time they met since Asuna gave her approval.

When they returned to town they found Nezha, and while deciding what to do, they talked about Kibaou's and Lind's groups, which were now competing to become strong and complete the game. However, they stopped when Kirito noticed that his appointment with Argo was in an hour. 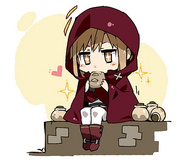