The 2nd Floor (第2層, Dai 2-sō?) of Aincrad is a savanna realm covered in plains and boulders and roughly the same size as the first floor.

The background music for the second floor is more sorrowful in tone (oboe music) than the string orchestral music for the first floor. The NPCs also have subtle differences in their garments.

The 2nd Floor is divided into a wide-open northern half and a narrow southern half. The floor consists mostly of table-topped mountains, looming over plains, dotted with small caves through which underground rivers run. It is primarily inhabited by large ox-type monsters.

To the west of Urbus is a savanna and field region characterized by dangerous buffalo-type monsters roaming about. Beyond the savanna is a wasteland which Kirito regards as dangerous when the floor is opened.

There is an exceptionally high towering mountain in the southern edge of the floor, which is a small clearing surrounded by cliffs, a spring, and a lone tree. This is the start point of Martial Arts quest.

Urbus is the main settlement of the second floor. It is about 300 meters in diameter. The entire city appears to be excavated from a flat-topped mountain and rests in a crater. The city gates and walls rest on the outer rim of the crater.

Like all district settlements, Urbus has a main street which runs north-south. The 2nd Floor Teleport Gate is located in an elevated Town Square.

The buildings in Urbus are all relatively of the same height, so it is possible to jump from rooftop to rooftop.

Marome is a small village about three kilometers southeast of Urbus. Its shops lack variety in wares, and it has no NPC blacksmith.

The hut is located on top of mountain of the second floor. Kirito reached the hut with Argo's guide.

A panorama view of the 2nd Floor. 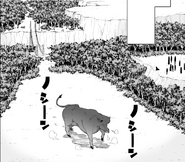 The closest settlement to the Labyrinth, Taran. 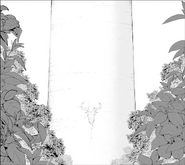 The Labyrinth.
Add a photo to this gallery