The main settlement of the 3rd Floor is located in the northeast of the Forest of Wavering Mists.[2] The town consists of three gigantic baobab trees, which were hollowed out into many-floored structures.[3]

The Forest Elf Camp is the key location for a chapter in both sides of the Elf War campaign. The camp disappears and reappears at a random location once someone completes the respective task at the camp.[5]

The Queen Spider's Nest is a public dungeon within the forest and its location is generated randomly. The dungeon is inhabited by a variety of spiders, as well as a dungeon boss named Nephila Regina, and is part of several quests, including the Elf War campaign and the guild creation quest.[6]

The Western and Eastern Spirit Trees are teleport gates that can only be used by dark and forest elves respectively. These trees can be used to travel between the floors of Aincrad by elves, bypassing the need to go through the Labyrinth.[7]

Dessel is the closest town to the Labyrinth.[7]

In Sword Art Online, the floor was unlocked on December 14, 2022,[8] after the defeat of Asterius the Taurus King. Once Kirito and Asuna reached the floor, they began the Elf War campaign, siding with the dark elves. Unexpectedly, the two managed to defeat the forest elf without Kizmel sacrificing herself. Kizmel offered them to come to the dark elf base to be rewarded for their assistance.

After sleeping in Kizmel's tent until 03:00 on December 15, the three proceeded with the second chapter of the campaign and discovered the Queen Spider's Nest. While the trio was exploring the cave for the quest, Kibaou's party entered the cave to complete a task needed for the guild formation quest and unintentionally drew the attention of the boss of the dungeon, Nephila Regina, and began running towards the exit. Fearing the worst case scenario, Kirito attracted the attention of the spider and lured it away into a big room, where his party defeated it.

That day, a five member party led by Lind also began the Elf War campaign, siding with the forest elves. Like the majority of players attempting the quest, they focused on defence, waiting for the forest elf to activate a suicide attack and defeat the dark elf, based on Morte's knowledge of the beta test. At five o'clock, the first strategy meeting was held in Zumfut.

Kirito and Asuna spent the following three days completing quests, including three more chapters of the Elf War campaign, collecting materials and buffing their skills. The pair had to pause the campaign quest after completing the fifth chapter due to taking part in the battle against the floor's Field Boss on December 18, which concluded with no casualties and Kirito earning the Last Attack bonus.

On December 19, after midnight, Kirito attempted to complete the sixth chapter of the campaign quest by sneaking into the Forest Elf Camp to steal an item needed for the quest, but noticed that Morte had been hiding near the camp. Kirito was challenged to a duel by Morte, who threatened to disrupt Kirito's quest. Although Morte managed to cut Kirito's hit points to just a bit above the halfway mark with his tricks, and attempted to abuse the dueling system as a method of legal Player Killing, Kirito managed to even the difference with his own trick. At that moment, Morte suddenly claimed that he was out of time and ended the duel in a draw.

Several moments later, a group of members of the Aincrad Liberation Squad and a group of members of the Dragon Knights Brigade, manipulated by Morte, encountered each other near the Forest Elf Camp, both having the goal of completing a task required for the Elf War campaign. As the two guilds began conflicting which of them had the right to complete their quest first, Kirito sneaked into the camp and stole an item needed for his own quest, causing the camp to disappear after a few moments.

With the help of Asuna and Kizmel, Kirito managed to convince the two guilds to find a peaceful solution. The two guilds both agreed to abandon the quest, but trusted Kirito's with the task of completing the remaining quests in the campaign on the floor to investigate if the quest was crucial for defeating the Floor Boss.

While the two clearer guilds advanced through the Labyrinth, with Kizmel's help, Kirito and Asuna completed the remaining chapters of the campaign quest on the 3rd Floor in a day and parted with Kizmel, who used the Western Spirit Tree to travel to the 4th Floor to help deliver the Jade Key. When the pair reported to the dark elf commander to complete the quest, they were given the usual rewards for quests, along with a commendation to give to a dark elf general on the 4th Floor, and a minor piece of advice about the boss guarding the Labyrinth on that floor.

By the time of the second strategy meeting in Zumfut at five o'clock in the evening on December 20, the clearers had already finished mapping the Labyrinth, with the Dragon Knights Brigade finding the boss room first. The meeting began with the schedule of the battle the following day, then continued with the strategy for the battle, and concluded with Kirito's report on the campaign quest and Lind's concluding speech. The boss of the floor was defeated at 13:12 on December 21 by a forty-two-member raid after a fifty-three-minute battle, with no casualties and Kirito claiming the Last Attack bonus. 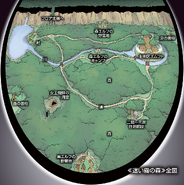 A map of the Forest of Wavering Mists

The Forest of Wavering Mists 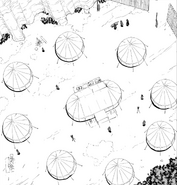 The Dark Elf Base.

Entrance to the Queen Spider's Nest.

One of the two Spirit Trees on the floor. 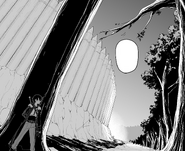 The wall of the Forest Elf Camp.
Add a photo to this gallery