The 55th Floor (第55層, Dai 55-sō?) of Aincrad is a geographically varied floor and is the floor where the Knights of the Blood headquarters is located later in the game.

The geography of the floor is largely inconsistent. While the main settlement is located in an area of hilly grass fields,[1] the Labyrinth is located in an arid and desolate wasteland devoid of any vegetation[2] and riddled with multiple canyons.[1] Meanwhile, the western region of the floor consists of fields that are covered in large amounts of snow and ice, even in early summer.[3] This region is also notable for its mountain ranges that, like the rest of the region, are covered in snow.[4]

Granzam, commonly nicknamed as the Steel City, is the main settlement of the floor. The Knights of the Blood later acquired a new guild headquarters within the city, after its members complained that their previous headquarters on the 39th Floor was too small.

An unnamed tiny hamlet is located in the northern corner of the floor and is the place where players can accept the quest to fight X'rphan the White Wyrm.

The West Mountain is a field dungeon located in the western region of the floor and is the place where a dragon that produces a high-grade metal spawns.

The floor became the front line sometime in February, 2024 and was cleared by March, 2024.[5][6] At some point, the Knights of the Blood decided to purchase a new guild home within the main settlement of the floor and had used the headquarters till the day Sword Art Online was cleared.

On June 25, 2024, Kirito and Lisbeth came to the western region of this floor to find a Crystalite Ingot for Kirito's new weapon. After accidentally falling into the dragon's lair and spending a night there, they found an ingot within the lair and, when the dragon came back to its lair for the day, they used it to get out of the lair. 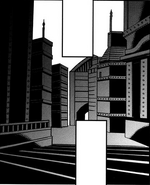 The western wall of Granzam.

A canyon close the the Labyrinth's entrance.

The top of the West Mountain.

The mountain range to the west of the floor.
Add a photo to this gallery