Disclaimer: very little is known about abec and information from different sources is not consistent, therefore the following page may not be completely accurate. 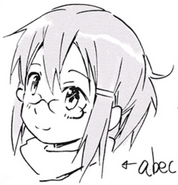 abec, drawn by Phantom Bullet comic artist
Add a photo to this gallery

Retrieved from "https://swordartonline.fandom.com/wiki/Abec?oldid=172938"
Community content is available under CC-BY-SA unless otherwise noted.