«Accuracy International L115A3» (アキュラシー・インターナショナル・L115A3, Akyurashī Intānashonaru L115A3?), nicknamed as «Silent Assassin» (, Sairento Asashin?) by the players, is a rare sniper equipped with a silencer that is used by Sterben in Gun Gale Online to stun his targets from afar before going in to stage a murder with his Type 54 "Black Star".

Like the Metamaterial Optical Camouflage, Sterben acquired the sniper by purchasing it from the game's Real Money Trade system using his monthly 500,000 yen allowance.

«Accuracy International L115A3» is a large sniper rifle that is similar in length to the PGM Ultima Ratio Hecate II, though it is slimmer than Hecate. It has several bolt holes that pass through the mechanisms, a highly-advanced grip that has a thumb handle and a polished dark-gray body. The most unique aspect about the weapon is that it is designed to be used with a suppressor that allows the user to snipe targets 2,000 meters or more way without being heard or seen.

On December 14, at around 8:40 pm during the 3rd Bullet of Bullets, Sterben used the sniper, loaded with electrical stun bullets, to shoot Pale Rider, momentarily stunning him so that Sterben could get closer to use his Type 54 "Black Star" to stage a real life murder being done via a game.

A bit more than 15 minutes later, Sterben shot Sinon with a stun bullet as she was moving through a hole in a collapsed tower's wall. He then attempted to shoot Sinon with his Black Star from up-close, but his attempt was interrupted by Kirito. Sterben quickly changed back to his sniper and reloaded it with regular .338 Lapua bullets for a sure kill, firing at Kirito afterwards. Although the bullet hit its mark, it only grazed his shoulder, thus did not deal enough damage to kill him.

About 30 minutes later, Sterben used the sniper to shoot at Kirito who was out in the open as bait, however, Kirito barely managed to dodge the bullet after sensing a "killing intent". After Sinon killed Yamikaze with a sniper bullet, thus revealing her position, both of them fired at each other with their snipers. Sterben's bullet missed Sinon and instead hit her Hecate's scope, destroying it in the process, while Sinon's large caliber bullet hit the L115A3's weak spot directly, shattering the sniper into its components and destroying the mechanism part of the sniper completely. 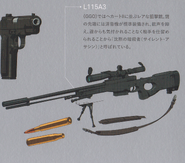 The concept of the Sterben's sniper riffle - Accuracy International L115A3 from the "Design Works II" artbook.

The concept of the Sterben's sniper riffle - Accuracy International L115A3 and estoc from the "Design Works II" artbook.

Items
Retrieved from "https://swordartonline.fandom.com/wiki/Accuracy_International_L115A3?oldid=134639"
Community content is available under CC-BY-SA unless otherwise noted.