Before the tragedy of the 25th Floor, the Aincrad Liberation Squad, led by Kibaou, was a Clearer guild that constituted a third of the Clearers' ranks, while Kibaou himself motivated everyone on the front lines to continue fighting and was even regarded as the leader of the clearing group. However, everything changed on the 25th Floor. This Floor housed abnormally strong monsters when compared to those on the 24th Floor, its topography was as complex as a maze, it had plenty of pitfall traps, which led to poisonous swamps, and information about the Floor from Non-Player Characters (NPCs) was scarce.

Misled by false information, Kibaou rushed into the boss room with only about forty members, insufficient to form a proper raid group, of the guild. After the tragic event that resulted in the deaths of more than half of the guild, Kibaou and the remaining members of the ALS parted from the clearing group and left for the 1st Floor, where they merged with the mutual aid organization, «MMO Today», led by Thinker. This congregation eventually turned into the Aincrad Liberation Force.[2]

Initially, the main goal of the ALS was to clear the game, while the goal of MTD was to spread information and resources equally among as many players as possible. After the merge of the two guilds, the congregation was turned into an organization for maintaining order among players. They were nicknamed «The Army» after they began to wear armored uniforms.

Aincrad Liberation Force was created after the merge of the mutual aid organization «MMO Today», formed by Thinker, and the former clearing guild «Aincrad Liberation Squad», led by Kibaou.[2] After the merge, Thinker remained as the official guild leader of the new guild, while Kibaou became the sub-leader. However, the guild grew so large in number of players and lacked the strong leadership required to maintain such a large guild that coups and revolts became quite common. The leaders of the guild gradually lost control while Kibaou came to power. Kibaou then strengthened the structure of the organization and changed the name of the guild to "Aincrad Liberation Force". Additionally, he monopolized fields with effective rates though multiple displays of power, greatly increasing the guild's profits and giving political power to his supporters, which eventually led to them getting carried away and starting acts of extortion under the name of "tax collection", while Thinker had been reduced to a mere figurehead.

However, due to focusing mainly on accumulation of wealth and power, many players were dissatisfied with Kibaou for not caring about clearing the death game, causing Kibaou to take action to restrain this dissatisfaction. However, after a disastrous reckless gamble of sending a group of 12 of the highest level players of the guild to defeat the boss of the 74th Floor on their own, resulting in the death of Kobatz, the commander of the unit, as well as 2 other members, he was about to be exiled from the guild. Desperate, he set a trap for Thinker, luring him to a high leveled dungeon under the Castle, unarmed and with no teleportation crystals. Using a corridor crystal to send him deep into the dungeon, Thinker was trapped in the safe zone at the end of the dungeon, and Kibaou successfully assumed control of the guild.

Thinker was rescued by Kirito, Asuna, and Yulier. Kibaou and his followers were exiled from The Army after this event and Thinker decided to break down the guild to create a more peaceful organization for mutual aid once again.[3] 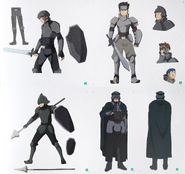 Concepts from the Design Works artbook.