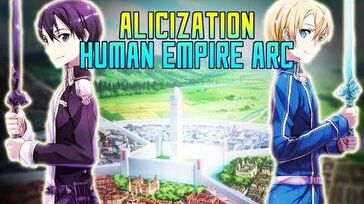 By June, 2026, Kirigaya Kazuto (Kirito) was offered a job at a private enterprise, named Rath, by Kikuoka Seijirou, the VR crimes division member who Kazuto had been cooperating with ever since the end of the Sword Art Online incident. The job was to test out a 4th generation experimental FullDive machine, called the Soul Translator (STL), which ran on completely different principles than the FullDive machines before it. His job was seemingly simple: remain in continuous FullDive during the weekend and his memories of the testing would be blocked as a security measure. However, unbeknownst to him, the company was not actually testing the machine itself, but creating a special Bottom-Up type Artificial Intelligence (AI) for military use. For that reason, the company had copied the soul of a newborn baby and made it as a template for creating new AI, which would then be nurtured in a specialised virtual world, called Underworld, where time flows a thousand times faster than in the real world due to Fluctlight Acceleration. As the AIs created by Rath were far too compliant with laws to be used for the military, Rath brought Kazuto into the world with his memories restricted to test why the residents of Underworld were unable to break any laws. He lived in the world for nearly eleven years of accelerated time as a child again, until his influence resulted in one of the residents, a girl named Alice, to break one of the rules of the Taboo Index.

After the conclusion of the experiment, Kazuto returned to the real world with the memories of his time in Underworld blocked. However, while escorting Yuuki Asuna home, he was attacked by Kanamoto Atsushi (Johnny Black), the last member of the Death Gun plot who managed to avoid being caught by the police. During their scuffle, Atsushi managed to inject Kazuto with the last syringe of succinylcholine, causing Kazuto's heart to stop. Although doctors were able to restart his heart, Kazuto's brain suffered major damage due to the lack of oxygen and thus he ended up in a coma. After Kazuto's body was secretly kidnapped by the Japan Self Defense Force (JSDF) and brought to a secret base in the Pacific Ocean, he was connected to one of the Soul Translators to treat his brain damage. Kazuto then woke up in Underworld, though with his memories of the real world still intact.