Not to be confused with Kirito's Night Sky Sword in Underworld.

Leafa speculated that the sword was made for an Imp or Gnome character due to its size, and was amazed that Kirito, whose avatar seemed to have a speed-build, chose such a heavy sword. Its immense weight was just right for Kirito, as he was able to even block arrows while wielding it with one hand. Even though the sword is nothing special in appearance or power, in the hands of Kirito it is able to match against the «Demonic Sword Gram».

Kirito's great sword is about as tall as his Spriggan form, nearly touching the ground when sheathed along his backside. The hilt is a medium-gray color with an oval-shaped pommel that leads up to the hand-guard, which takes the appearance of a crescent-shape with a line going horizontal with two circles on the hand-guard. The blade seems to have a triangular shape as its wide near the hilt and shortens out into a sharp point at the tip and is double-edged.

Kirito purchased this extremely large and heavy sword from a Non-Player Character (NPC) in Sylph territory, after appraising his lightweight starting-gear sword as lousy and deciding that all other swords in the local shops were too lightweight for his taste. 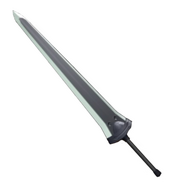 Items
Retrieved from "https://swordartonline.fandom.com/wiki/Black_Iron_Great_Sword?oldid=170408"
Community content is available under CC-BY-SA unless otherwise noted.