Volume 8 A Murder Case in the Area

Episode 5
Caynz (カインズ, Kainzu?) is one of the 10,000 players who were trapped in the online game «Sword Art Online». He was a former member of the guild Golden Apple and teamed up with Yolko to find out who killed Griselda.

Caynz has a short crop of brown hair and small, dark eyes. As a front line warrior, he wears heavy metal armour for battle.[1]

Caynz is a person who seeks justice, much like Yolko, for instance, he imitated being murdered to find and apprehend the perpetrator behind Griselda's death. Like his girlfriend, Caynz is a good actor, as he managed to fool the entire crowd of players, including Kirito and Asuna, into believing that he was PK-ed within the safe zone.

Caynz was part of a small guild called «Golden Apple», which only had eight members. At some point, he discovered that another player, called Kains, whose name had an identical pronunciation to Caynz, had died due to continuous piercing DoT. One day, while battling in a dungeon, he and his guild found a rare-drop item and they voted to decide what to do with it. Caynz was in favor of keeping the item, but losing in the voting three to five, his guild decided to sell the ring. However, after the leader of the guild departed for the front lines to have the ring auctioned, she never came back, and they later found out that she was killed by an assassin.

Caynz and Yolko later decided to fake a method of player-killing within a safe area to be able to solve the mystery of Griselda's murder. They suspected Schmitt of causing her death due to being the only other member voting to keep the ring, so they decided to fake their own deaths to create a mysterious avenger to cause Schmitt to panic for his own life and thus lose his guard. They came into contact with Griselda's husband, Grimlock, and asked him to make them several weapons for their plan. Although Grimlock was reluctant to help at first, he agreed to help them in the end, after hearing their entire plan and devising a plan to silence the incident for good. Remembering that they had seen a player called Kains who had died some time ago due to continuous piercing DoT, they decided to fake Caynz's death on the same day and month a year after Kains' death, so that the Monument of Life could not be used to reveal their plan.

As Kirito and Asuna were about to have dinner in an NPC restaurant in the 57th Floor town, they heard someone screaming and they ran out of the restaurant to find the source of the scream. Caynz was found hanging outside the church with a weapon, the «Guilty Thorn», pierced through him. Kirito and Asuna tried to save him, but he "died" before they were able to reach him.

The next day it was revealed that he was not really dead and that, along with Yolko, they had faked their deaths in order to trick Schmitt into believing that Griselda's ghost was seeking revenge, so that they could find out who had killed their guild leader. After they recorded Schmitt's confession of unknowingly being an accomplice in the murder, they were surrounded by the top three members of the Laughing Coffin guild, but were saved by Kirito. It was later revealed that Grimlock was the one who planned Griselda's death and wanted to kill them to finally cover the incident.

Caynz was among the 6,147 players who were logged out of the game after Kirito killed Heathcliff, prematurely clearing the game.[2] 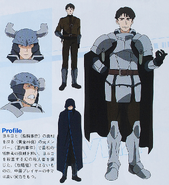