Sword Art Online Wiki
Register
Don't have an account?
Sign In
Advertisement
in: Pages to be adopted, Under Construction Articles, Characters,
and 6 more

Infinity Moment
Ceba (セバ, Seba?) was one of the 10,000 players who were trapped in Sword Art Online. After being freed from Sword Art Online, Ceba began playing ALfheim Online as a leprechaun. Ceba has a pet dog, named Yodare, in the game.

Ceba had wanted to be an artist since she was a child. She had graduated from high school and decided to go to art school, but unwillingly became trapped in Sword Art Online for two years. Although Ceba returned to the real world alive, she was too scared that she had lost her drawing skills during the two years, thus she was unable to draw anything, and decided to hide in ALfheim Online. However, there she unconsciously drew a street scene on parchment, and theorised that by drawing in the virtual world, she would be able to reacquire her ability in the real world as well. But as virtual reality games did not support drawing, while Ceba felt the need to draw specifically in New Aincrad, she sought for a viable large canvas, and eventually discovered rumours about a hidden boss on the 5th Floor of New Aincrad dropping an item called the «Guild Flag», which could serve as the largest canvas in the game.[1]

On February 8, 2026, Ceba attempted to challenge the hidden boss on the 5th Floor of New Aincrad, but was defeated after only depleting two of its six Hit Point bars. Before she could respawn, she heard another player, who had come to fight the same boss with his party, telling her to wait. Several moments later, Ceba's Remain Light was retrieved and she was revived in a safe area nearby. Ceba introduced herself to the party, while one member of the group, Yuuki, introduced herself and the other members of her party: Asuna, Kirito, and Sinon. Kirito materialised a picnic set, while Ceba materialised a bavarois and explained why she wanted to defeat the boss.

Having heard Ceba's story, the four member party decided to help Ceba defeat the boss. However, they did not receive the rumoured reward from defeating the boss, thus Asuna proposed to use a large building with smooth walls as the canvas, using high-durability colourful jam as the paint. Yui informed them that the largest wall in New Aincrad was the outer wall of Aincrad itself. An hour later, the group prepared the materials Ceba needed to paint, and after thirty minutes, Ceba finished painting a portrait of her new friends. 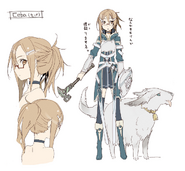