View source
watch 01:36
We're Getting Mutants in the MCU - The Loop
Do you like this video?
Play Sound

Crystals (結晶, Kesshō?) were a consumable item in Sword Art Online. They were considered to be one of the most convenient types of items and the closest thing to magic in Aincrad. Crystals are divided into multiple, colour-coded types based on their effects. The common trait of all crystals is that they take immediate effect upon being consumed, rather than applying their effect over a certain period of time. Crystals can be used for healing, curing debuffs, teleportation of individuals, opening short-cut corridors to a specified location for a group of players, and displaying images or replaying voice messages. As a downside to their extreme usefulness, all crystals are more or less rare and expensive commodities, which results in players being hesitant to use them outside of emergencies.

Most crystals can be obtained through certain NPC shops or monster drops, except for the Corridor Crystal. Corridor Crystals are the rarest of all crystals, obtainable only through trading with other players, from killing monsters, or by finding them in a treasure chest.[citation needed]

Crystals debut in the Drop pool for all monsters starting from the 6th Floor. According to Kirito's empirical observations, the drop rate for crystals on the 6th Floor is about 0.01%, increasing tenfold to 0.1% on the 7th Floor.[2]

In general crystals can be activated through either one of two methods. The first method is to physically tap on the crystal and select the Use (使用, Shiyou?) button from a pop-up window. Alternatively, the player may activate the crystals through voice commands while holding the crystal in one of their hands. When the user desires to use the crystal on another player, they must physically touch the player with their other hand when activating the crystal; otherwise, the effects of the crystal are applied to the user themselves by default.[2]

Crystals can be rendered unusable by anti-crystal fields, encountered either as traps in dungeons or as a feature of boss rooms starting from the 74th Floor. Additionally, since the crystals are primarily used through voice commands, Silencing debuffs afflicted by certain monsters may also render players unable to use their crystals.

The Message Recording Crystal in use.

An illustration of a Message Recording Crystal in the novel 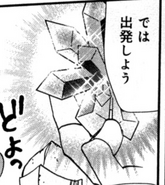 An illustration of a Corridor Crystal from the Aincrad Manga 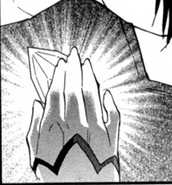 An illustration of a Healing Crystal from the Aincrad Manga

An illustration of a Teleport Crystal from the Aincrad Manga