Deusolbert (デュソルバート, Deyusorubāto?), also known as Deusolbert Synthesis Seven (デュソルバート・シンセシス・セブン, Deyusorubāto Shinseshisu Sebun?), is the Integrity Knight that arrived to apprehend Alice after she broke the Taboo Index. Several years later, he confronted Kirito and Eugeo at the Central Cathedral, and participated in the War of the Underworld half a year later. Deusolbert's main weapon of choice is the «Conflagrant Flame Bow».

Deusolbert first appears as a knight wearing silver heavy armor that is polished to such an extent that the armor seems like a mirror. The armor covers his entire body and all the joints are covered by finely knit silver chains. The headpiece, which mimics a dragon's head, has its forehead protruding out, has long decorated horns stretched backwards on its sides, while the Knight's face is hidden behind a huge visor with a cross-shape opening. After he returns to the Central Cathedral and is promoted to guarding the Central Cathedral, he is issued a copper-red version of the armor.

Deusolbert seemingly looks like a man of about forty years old. His hair, cut short, and his eyebrows are ashen-red, similar in color to rusted iron. His high nose bridge and pursed lips are straight, like a cut from a knife, and the sharpness of his eyes make them seem like steel arrowheads.

Deusolbert used to be assigned the task of overseeing the Northern Norlangarth Seventh Remote Region, which includes Rulid Village, until he was promoted to guarding the Central Cathedral.

The next day, as Alice had touched the soil of the «Dark Territory» and thus had broken one of the clauses of the Taboo Index, Deusolbert arrived at Rulid Village on his dragon. There he announced that he had come to arrest Alice for breaking a clause of the Taboo Index by, trespassing into the «Dark Territory», and ordered two villagers to bring Alice to him. Once the villagers brought Alice to Deusolbert, he took out a restraining tool and gave it to the village chief, Gasupht Zuberg, to bind his daughter with it. Even though Kirito attempted to defend Alice by saying that she had merely touched the ground with her hand briefly, Deusolbert dismissed Kirito's objection by saying that even such a mere action was enough and, by waving his hand, he ordered the two villagers to pull Kirito and Eugeo away. After confirming that the restraining tool was securely tied, he somehow disarmed Kirito by just glancing at him, without even drawing his sword or bow. Finally, Deusolbert attached the end of the retraining tool's chain to the saddle of his dragon, climbed onto the saddle and took off with Alice.

Deusolbert made a brief appearance after Kirito and Eugeo caused Eldrie Synthesis Thirty-one to start recalling his past life before being turned into an Integrity Knight. Deusolbert fired arrows with his bow from atop of his dragon at the two youngsters to prevent them from harming Eldrie, but only aimed at their limbs to immobilize them, as he was ordered to bring the two youngsters back alive. Deusolbert continued to chase after the youngsters with his dragon until they escaped into the Great Library Room.

As Kirito and Eugeo attempted to leave the equipment vault with their swords, Deusolbert met them with a hail of arrows, fired from atop the staircase. Deusolbert attempted to fire again at the youngsters to immobilize them, but Kirito used a Burst Element command to blind Deusolbert with the luminous elements that he and Eugeo had generated. As Kirito and Eugeo reached the staircase, Deusolbert drew every single last one of his arrows and loaded them on his bow, though due to Deusolbert still having issues with his eyesight, Kirito and Eugeo managed to avoid any serious wounds. Even though the string of Deusolbert's bow was broken after firing thirty arrows simultaneously, he began chanting the «Armament Full Control Art» for his bow right after he used up all of his arrows. As soon as the ritual was fully recited, Deusolbert's bow was set ablaze.

After accusing the youngsters of using Dark Arts against Integrity Knight Eldrie Synthesis Thirty-one and telling the youngsters that he was ordered to bring them in alive, he moved his hand to where the string of the bow used to be and, at that moment, the bow's flames surged out in front of the bow, forming the shape of an arrow. As Kirito charged in and reached the midway point of the stairs, Deusolbert drew the "string" to its end and fired a single, spear-sized flame arrow at the youngsters. Kirito attempted to block the arrow by forming five ice shields to counter the attack, but the arrow managed to pierce through all of the shields one by one, until Kirito used the defensive Secret Move, «Spinning Shield», to create a sixth shield and shredded the arrow into a thousand pieces, which exploded shortly afterwards and whisked him into the air.

Meanwhile, Eugeo closed his distance to Deusolbert to be able to use his sword to battle with the Knight. Seeing that there wasn't enough time to prepare another arrow, Deusolbert gathered the bow's flames into his fist and used it to counter Eugeo's «Vertical». Though the two maintained a stalemate for a few seconds, the heat of Deusolbert's fist began affecting Eugeo's sword. However, Eugeo was somehow able to tap into the ice elemental attribute of his sword as an abrupt chill started coming from the sword and caused Deusolbert's posture to falter and Eugeo was able to repulse Deusolbert's fist but was unable to hit Deusolbert with the skill. Using this opportunity, Deusolbert attempted to punch Eugeo with his right arm, which though wasn't blazing, would blow Eugeo to the bottom of the stairs. Though Eugeo countered with «Vertical Arc» and forced Deusolbert to move back, the temporary rigidness caused by using a Secret Move would have given Deusolbert the chance to widen the distance and fire another flame arrow, therefore Eugeo attempted to connect his previous Secret Move with another and successfully activated «Slant», with which he slashed Deusolbert's right shoulder.

After Deusolbert's wound froze up due to the effect of Eugeo's sword and Deusolbert saw that he could not use the Sacred Arts due to his left arm being frozen, he gave up on fighting Eugeo and Kirito. He asked the two for the names of the skills they used and then admitted to being wrong about them using Dark Arts on Eldrie. After asking the youngsters for their names, Deusolbert warned them that several Integrity Knights awaited the two on the 50th floor of the Cathedral and were ordered to kill them if they made it that far. He then asked them to finish him off, before he suffered the disgrace of failing his task, and revealed his name to them. Realizing that the Knight collapsed in front of him is the same one who took Alice away 8 years ago, Eugeo became enraged and attempted to finish off Deusolbert for taking away their friend, but was stopped by Kirito, who explained that Deusolbert probably had no memory of the incident eight years ago, which Deusolbert confirmed. After Kirito explained that the Administrator stole Deusolbert's memory of the incident and the memories of his life before becoming an Integrity Knight, even though Deusolbert was reluctant to believe in the explanation, Kirito and Eugeo proceeded with ascending the stairs, leaving Deusolbert behind to choose what next action to take for himself.

Deusolbert facing against Eugeo and Kirito outside the Armory of the Central Cathedral.

Deusolbert's position immediately prior to the beginning of the War of Underworld.

Deusolbert with Alice, Bercouli, Cardinal, Eldrie, Eugeo, Fanatio, Kirito, and Quinella on the third key visual for the Alicization anime. 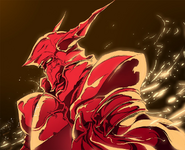 An illustration of Deusolbert by Yamada Koutarou, the artist for the Project Alicization manga, for Alicization Episode 14.

Deusolbert with Alice, Bercouli, Eldrie, Fanatio, Renly, and Scheta on the cover of Alicization War of Underowrld's third Blu-Ray/DVD
Add a photo to this gallery

Retrieved from "https://swordartonline.fandom.com/wiki/Deusolbert?oldid=169507"
Community content is available under CC-BY-SA unless otherwise noted.