Episode 3
Ducker (ダッカー, Dakkā?) was one of the 10,000 players who were trapped in «Sword Art Online» and a member of the «Moonlit Black Cats» guild. Ducker was a thief-build[† 1] player and was killed along with most of his guild, excluding Kirito, when he triggered a trap that spawned multiple monsters and prevented the use of crystals.

Ducker was an outgoing and playful person who once jokingly grabbed Keita from behind to get his attention.

Before being trapped in the virtual world of Sword Art Online, Ducker was part of his school's tech team. Almost every member of the team entered the virtual world, where they formed a guild.[citation needed]

One day, while they were on the losing side of a monster battle in a dungeon, Ducker and his guildmates were rescued by Kirito, who safely escorted them out of the dungeon. They were thankful for the action and decided to invite the benefactor into their guild, unaware of him being a beater, which he accepted.

On June 22, 2023, Ducker and other members of the guild were exploring the Labyrinth of the 27th Floor to raise funds for a celebration, when Ducker found a hidden chest. Due to his trap disabling skill being too low for that part of the Labyrinth, his action caused the room to be sealed in an Anti-Crystal Area that blocked the use of crystals, as well as causing numerous high-level monsters to spawn in the room. As the monsters attacked the under-leveled players, Ducker was the first member to fall in the ensuing battle. 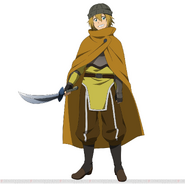 Retrieved from "https://swordartonline.fandom.com/wiki/Ducker?oldid=170784"
Community content is available under CC-BY-SA unless otherwise noted.