A Dungeon (ダンジョン, Danjon?) is any type of adventuring location in MMO games, which is designed like a labyrinth or maze-like structure that has numerous paths, monsters, and rooms (for closed dungeons). Two main types of dungeons exist in Sword Art Online: Labyrinths (迷宮区, Meikyū-ku?) and sub-dungeons.

In Aincrad, Labyrinths are tower-like structures with many floors that connect each Aincrad Floor to the next. The only unifying feature among Labyrinths is their 100 metre height, as each Labyrinth has an individual scale and design. Some may be bulky and squat with uniform width, others are narrow and willowy.[1]

Within each Aincrad Floor in Sword Art Online, one or more[2] Field Bosses were strategically placed somewhere between the Teleport Gate and the entrance to each Labyrinth in such a way that the Labyrinth could not be accessed until this boss was defeated.[3]

The inside of a Labyrinth is populated with numerous monsters, some of which respawned in approximately five minutes in Sword Art Online. Pale-blue lights are situated high above the Labyrinth floor to provide a modicum of lighting.[4]

The Boss Room of a Labyrinth must be found on the topmost Labyrinth level and cleared before the stairs to the next Aincrad Floor would be opened. In Sword Art Online, the walls of the staircase leading to the next Aincrad Floor contained thematic hints regarding the content of the following Floor. The most striking and memorable hint was a relief etched into the closed double-doors at the top of the stairs. Pushing these two stone door halves apart in the middle opens the door.

Labyrinths in Sword Art Online are literally mazes, full of difficult winding paths, traps, hidden rooms, and dead ends. Because of the difficulty of the paths, it often takes Front Line players a week to "map" the labyrinth on average, before the Boss Room is found.

At that point, Front Line players typically hold a meeting to strategize the Boss Battle. Several expeditionary parties are sent to gather information on the Boss before a real raid is attempted.

Between the Closed Beta Test and the Official Release, the labyrinth maps were likely changed, since it took more than a month for the first floor Boss Room to be located.

Most dungeons have a handful of safe areas, where monsters do not enter and attack players. They can be recognized by a special colored torch placed in the four corners on the wall. Although it is possible to stay in safe areas for several days on end, it is described as a particularly discomforting and sleepless experience, since nearby monster footsteps or growls can be heard frequently.

A Boss Room is an enormous room, located at the topmost floor of a Labyrinth in each Aincrad Floor. These rooms house doors to the stairs that lead to an upper Aincrad Floor, but these doors are protected by a powerful monster, called a boss, which requires large raiding parties to take down, that resides within the Room. After a boss is defeated, it will never re-spawn in the game.

The shape of the room differs from Floor to Floor. For example, the 1st Floor Boss Room was the shape of a rectangle, while the 74th Floor Boss Room was the shape of a dome. However, all Boss Rooms have several things in common. First of all, each one has only 2 entrances/exits: 1 from the Labyrinth below and 1 on the other side of the room leading to the next Floor. Although these doors usually stay open in SAO, allowing players to retreat from the Boss Fight if necessary, as the Bosses never leave their designated room, however, starting with the 75th Floor, the door would be sealed as soon as the players enter the room, preventing any chance of retreating. The Boss Rooms in New Aincrad are always sealed within 1 minute of entry, which is the time it takes for all the flames in the room to light up and form a circle and is considered as time given to players to prepare for the battle. The waiting time can be cancelled by pressing a stone button on the wall next to the door.

The Labyrinth-side entrance's appearance is usually a sign of the toughness of the boss inside: the lairs of weaker bosses usually have crude and rough entrances, while the lairs of powerful bosses are usually grim and made out of smoothly polished materials. All Boss Rooms are also quite dark, with many torches or other light sources, which only light up when the Boss Fight begins and dim out as soon as the battle is over, spread out throughout the room. Boss rooms starting with the 74th Floor come with Anti-Crystal Fields, which prevent the use of any crystals, including teleportation crystals, within the Room.

One of the most lethal, but rare, traps in Aincrad's dungeons is the Anti-Crystal Zone (結晶無効化空間, Kessho Mukou-ka Kūkan?) trap. As the name suggests, this kind of trap prohibits the use of crystals, disabling the players from teleporting and healing themselves with crystals in battle. While crystals can not be used, other items such as healing potions can be used but those take longer to use.

Concept art for the door that leads to the 1st floor's Boss' Room from the Design Works artbook.

Concept art for the 1st floor's Boss' Room from the Design Works artbook.

Concept art for the trap room in the 27th Floor's Labyrinth from the Anime Sword Art Online no Subete artbook. 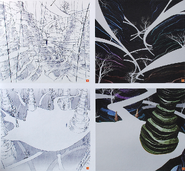 Concept art for the Labyrinth of the 74th Floor from the Design Works artbook.

Concept art of the door for the 74th Floor boss room from the Design Works art book.

Concept art for the 74th Floor boss room from the Design Works art book. View from another side of the room.