SII Episode 01
Dyne (ダイン, Dain?) is a player in the VRMMO game, Gun Gale Online. He is the leader of a PvP (anti-personnel) squadron that primarily targets weaker low-risk opponents. According to Sinon, he has a "poor personality."

Dyne has a large, rock-solid body, a rough face[1] with a mustache[2]. Dyne wears brown boots and gauntlets, a red scarf, a yellow cowboy hat, a yellow coat and brown pants.[2] During the third Bullet of Bullets (BoB), he was wearing woodland-patterned clothing.[3] Dyne uses a rare «SIG SG550» assault rifle that shoots 5.56mm caliber bullets.[1]

Dyne is a cautious player who only leads his squadron to fight against weaker opponents and would order his squadron to retreat if there was even a minuscule sign of danger.[1] However, he is also an overconfident person, thinking that a monster hunting group they had attacked six days ago would not prepare special countermeasures to prevent being wiped out again, that they would become careless again after a few days, and that they are only used to handling the predictable algorithms of monsters.[1] Dyne is also a hypocrite, as he negatively talks about monster hunting players becoming too predictable due to only fighting monsters all the time and thus not having any pride, yet he himself tries to ambush such a party in a similar way.[1]

Dyne is also a skillful player, being able to accurately fire even from longer distances.[1] As he has been a squadron leader for some time, he has a considerable amount of experience and is able to react to unusual tactics relatively fast, casting away his temporary inner doubt.[3] However, in a hopeless situation, like his squadron's encounter with Behemoth, he was about to give up without even a fight, thinking that he would die either way, if Sinon had not taken charge.[1]

Dyne was a player who managed to reach the finals of, at least, the first three[3] Bullet of Bullets tournaments. He was ranked 18th during the second tournament.[1]

Dyne led a squadron, which included Sinon and Ginrou, in ambushing a group of seven players, but ended in disaster. Dyne did not listen to Sinon's suggestion of taking out the suspicious cloaked man first and ordered to take out the player with the Minimi, seeing him as the biggest threat. Because of this, Sinon killed the Minimi user, but her second shot against the cloaked man was dodged. The cloaked man was then revealed to be Behemoth, a bodyguard armed with a GE M134 Minigun, who used his minigun to kill Ginrou and force his squad members to retreat. As a result, Dyne used a plasma grenade to commit suicide in an attempt to deal damage to the enemy group.

During the third Bullet of Bullets tournament, Dyne got chased by Pale Rider. He stopped at a metal bridge to fight him, but Pale Rider's speed allowed him to dodge Dyne's barrage and kill him. 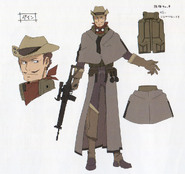 Dyne being convinced by Sinon. 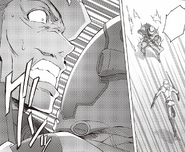