Sword Art Online Wiki
Register
Don't have an account?
Sign In
Advertisement
in: Candidates for Revision, Pages to be adopted, Under Construction Articles,
and 6 more
English

Sacrificed his life to counter a large-scale curse

Alicization Episode 11
Eldrie Woolsburg (エルドリエ・ウールスブルーグ, Erudorie Ūrusuburūgu?), also known as Eldrie Synthesis Thirty-one (エルドリエ・シンセシス・サーティワン, Erudorie Shinseshisu Sātiwan?), was a supporting character in the Alicization Arc. Eldrie was first class noble[2] who became an Integrity Knight after winning the Four Empires Unity Tournament. With memories of his previous life suppressed, Eldrie became the disciple of the Integrity Knight Order's greatest prodigy, Alice Synthesis Thirty, after discovering the fragile side of her hidden behind her exterior.[2] Eldrie was ordered by his master to guard the maze leading to the church's prison when youths named Eugeo and Kirito were arrested by her but was incapacitated by the two when the former began triggering his latent memories.[3] In the aftermath of the defeat of Supreme Priest Quinella, Eldrie was one of the seven high-ranking Integrity Knights who participated in the battle at the Great Eastern Gate against the Dark Territory, commanding the left flank of the First Unit of the Human Guardian Army.[2] Eldrie died in that battle by sacrificing himself to save the other knights from a large-scale umbra element curse attack cast by D.I.L.'s guild of Dark Arts sorcerers. 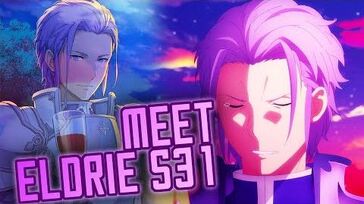 Eldrie was rather tall and had a thin stature, a stunningly beautiful face with eyebrows that gave off a rugged expression, and long pale purple hair. As an Integrity Knight, Eldrie wore a suit of polished silver armor with a purple mantle, which had a crest with a cross going through a circle embroidered upon it.[citation needed]

Eldrie Woolsburg was the eldest son of Eschdol Woolsburg, the greatest commander of the Norlangarth North Empire and a first class noble.[2] Eldrie was trained in the Imperial Knight Order and became its representative for the Empire Swordsmanship Tournament, where he defeated Sortiliena Serlut in his first match and Volo Levantein in the second. He later won the Four Empires Unity Tournament and was invited to the Central Cathedral. After he had arrived at the Cathedral, Quinella performed a «Synthesis Ritual» to suppress the memories of his past life via manipulation of his Fluctlight, and embed a «Piety Module» to guarantee loyalty to her.

Even when the memories of his life before becoming an Integrity Knight were suppressed, Eldrie's innate pride and conceit as a noble remained. Originally, he planned to avoid Alice, the prodigy knight that had fascinated most of the knights in the Order. However, when Eldrie came to the Central Cathedral's rose garden one evening, he spotted Alice mourning the passing of the dragon that had given birth to her own dragon and Eldrie's dragon. At first, Eldrie scoffed at the sight of the girl grieving for the loss of what he believed to be a mere beast; however, he soon realised that tears were welling from his own eyes as his heart quivered at Alice's crying.[2]

Ever since that day, Eldrie began to see as a girl capable of withstanding hard times, yet fragile at the same time, instilling within him an urge to protect her. Since Alice's talents far surpassed Eldrie's, however, he became her disciple to gain her guidance, hoping to one day be recognised as both a swordsman and a man by his master. Although Eldrie's zealous training served more to maintain his patience, rather than reach the level of his master due to Alice's overwhelming talent, the knight also devoted great effort in his conversations with his master over a variety of topics to see her smile. However, following his defeat by Eugeo and Kirito, Eldrie was shocked by the discovery that Kirito had achieved what he himself had failed: release his master from the ice confining her heart.[2]

After Eugeo and Kirito were imprisoned, Eldrie was ordered by his master, Alice Synthesis Thirty, to spend the night in the maze outside the prison, as she anticipated that the prisoners would try to escape. Eldrie himself initially did not believe that this would be possible and intended to admire the rosebuds with a glass of wine, but, to his surprise, the two prisoners actually escaped and came through the maze.

To enjoy himself, Eldrie decided to fight Kirito and Eugeo before returning them to prison. Since Kirito was using a chain as a whip, he decided to use his Frost Scale Whip instead of his sword. He enhanced the whip with the Armament Full Control Art and was able to easily counter Kirito's Sacred Art with his speed chanting.

After a series of struggles, Eldrie's left cheek was cut by Kirito using a fragment of a glass cup that Eldrie had shattered beforehand. As Eugeo attempted to attack him while he was in a stalemate with Kirito, Eldrie was forced to activate his Release Recollection command and thus transformed his whip into a snake, throwing Eugeo to the floor and breaking Kirito's chain.

At this point, Eugeo recalled that Eldrie Woolsburg was the champion of the Four Empires Unity Tournament that took place in the first third of the fourth month. This revelation shocked Eldrie, as he had no memories of his life as Eldrie Woolsburg before becoming an Integrity Knight. As Eldrie began thinking of his past, a purple prism protruded from his forehead, though it began fading away with time. Noticing this, Kirito encouraged Eugeo to trigger more of Eldrie's memories to stop the prism from fading away. However, just as they were making progress, this was interrupted by another Integrity Knight shooting arrows at the prisoners and the prism returned to Eldrie's forehead, while the prisoners escaped.

During an investigation of the Northern region, Eldrie coincidentally encountered Alice at her self-built home outside of Rulid Village. Despite his unsuccessful attempts at flattering his mentor once he landed near the house, Eldrie was invited inside to continue the conversation. There, the disciple attempted to persuade his mentor to return to her duties as an Integrity Knight, but to no avail. Assuming that Alice's refusal to return to her work stemmed from the need to nurse a now-mindless Kirito, Eldrie felt the urge to dispose of the broken swordsman; however, he was stopped by Alice before he could even leave the table. As their conversation continued, the male Integrity Knight learnt that Alice had retired from the front lines as she began to doubt her ability to wield the sword. Shocked by the declaration, Eldrie abandoned his hope of persuading his mentor to return to battle and thus bid her farewell, before leaving on his dragon.

When the Great Eastern Gate collapsed at sunset on the 7th Day of the 11th Month, 380 HEC, Eldrie's division on the left flank of the First Unit was confronted by the Dark Territory Army's flatland goblin forces led by Kosogi. However, before Eldrie and his troops could engage their enemies in battle, the flatland goblins used smoke grenades to bypass his forces entirely. By the time Eldrie and his forces cleared the smoke several minutes later and managed to pursue the goblins, their leader had already been Renly Synthesis Twenty-seven, a knight that had been branded a failure by the Supreme Priest Quinella. Enraged by the fact that he had lost his chance to regain his honour, Eldrie massacred the remaining fleeing goblins.

This failure left Eldrie fraught with a sense of having betrayed his master's expectations.Upon meeting Alice again, the young knight shared his sentiments of guilt and inadequacy with his master, prompting her to reassure him of his ability. However, their conversation was interrupted by Furgr, the chief of the Ogre race from the Dark Territory. Hearing that the Ogre desired to capture his master, an enraged Eldrie attempted to charge at Furgr, but his attack was stopped by Alice, who desired to extract more information from the ogre, before eventually killing him.

When a decoy army was organised for an expedition into the Dark Territory after learning from the Ogre chief that the commander of the Dark Territory Army, Emperor Vecta, Eldrie insisted on joining it but had to relent upon being remonstrated by Alice. However, when the decoy army was assaulted by a large-scale, worm-shaped curse attack cast by D.I.L. guild of Dark Arts sorcerers, prompting Alice to meet the attack to protect the army, Eldrie rode his dragon in pursuit of the army, passing by Alice to save her from the attack. Although Eldrie could not counteract the curse with his Frost Scale Whip, by activating the recollection release phase's Armament Full Control Art, Eldrie managed to force the curse to focus entirely on him and his Divine Object. After absorbing the full brunt of the curse, what remained of Eldrie's upper body was caught by Alice, passing away in her arms satisfied that he managed to secure her safety.