SII Episode 03
Endou (遠藤, Endō?) is a girl who attends the same school as Asada Shino and abuses her for her personal gain.

Endou's narrow eyes,[1] suspended by black eyeliner, and her pointed chin give off the impression of some sort of predatory insect.[2] Endou also has fancy coloured lips and long nails with a glossy shine.[2]

Endou is a manipulative person who approached Shino and pretended to be her friend just to be able to use Shino's home for personal use and as a place to stay overnight after getting drunk.

Endou is also a revengeful person with devil-like investigative abilities, as she dug into Shino's past and exposed Shino's past to the whole school to get back at her for calling the police after Endou and her friends invited several men to Shino's home.

Moreover, Endou is arrogant, as she bluntly demands money from Shino under the guise of lending money for train fares and expects that Shino will do as she is told and if she does not follow her demands, Endou reveals her cruel side by making use of Shino's gun phobia to hurt her. At one point, she even borrowed a model handgun from her brother and brought it to school to scare Shino and then used it to attempt to make Shino kneel, cry, and beg for forgiveness. She even went to the point of attempting to pull the trigger of the gun, though the built-in safeties prevented the gun from actually firing.

Awhile after Shino moved from the countryside and started attending high school, Endou and her friends found Shino's address on the class register and guessed that Shino lived alone, thus, one day, they approached Shino and invited her to join them for lunch and the four of them began stopping at fast food restaurants on the way home from school. One day, Endou and her friends asked Shino to let them come over to her place to play, to which Shino immediately agreed. Before long, the three of them used Shino's room to change into casual clothing, then ride the train to go play. One day, they left their belongings at Shino's room and, from that day on, the clothes of the three began to occupy her small closet. By the start of May, the Endou and her two friends would go out to play, return drunk and then stay at Shino's place overnight. At some point, Shino timidly complained about their actions, so Endou requested a spare key the next day. Then, in late May, Endou and her friends invited over some men to Shino's home, prompting Shino to call the police.

After that incident, Endou investigated why Shino lived alone and learnt of the incident in Shino's childhood, during which Shino shot a post office robber who threatened her mother, and exposed it to the whole school. Endou also began bluntly demanding money from Shino from that day on.

One day, as Shino was browsing through the shopping district, Endou and her two friends approached Shino and, after dragging her to an alley, bluntly demanded money from her. When Shino refused and tried to make her way out, knowing that Endou and company would not dare to take real action to avoid any police issues, Endou made use of Shino's trauma by forming a child's imitation of a handgun and pointing it at Shino, triggering her traumatic memories. As she imitated the sound of a handgun firing, she told Shino that her older brother had a number of model guns and that she would show them to her the next time at school. As the girls continued to make fun of Shino and reached for her bag to take it, Shinkawa Kyouji came to the scene, shouting that he had called a patrolman. Endou's group then left the scene at an amazing speed and mixed into the crowd.

After the Gun Gale Online incident, Endou and her lackeys invited Shino to meet them at school. Endou demanded Shino to give them 20,000 yen[† 1] for starters as they were low on money. As Shino refused again, Endou took out a handgun model, which she had borrowed from her brother, from her bag and pointed it at Shino. As Shino did not give the expected response, Endou anxiously smirked and ordered her to kneel and beg for forgiveness, otherwise, she would shoot her. However, when Endou squeezed the trigger while aiming at Shino's left shoulder, the gun did not fire due to the built-in safeties. After Endou attempted to fire several more times, Shino took the gun from Endou, told her about the safeties and how to properly use the gun, and then fired at a can 6 meters away and managed to graze its top. After seeing this, Endou lost all of her arrogance and timidly stepped half a step back while letting out a terrified sound. After Shino lowered the gun's hammer and engaged the two safeties again, Endou timidly reached out for the gun that Shino was handing over. The trio then stood blankly while Shino took her leave. 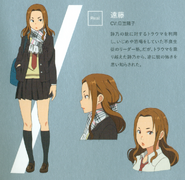