View source
watch 01:36
We're Getting Mutants in the MCU - The Loop
Do you like this video?
Play Sound

The FN Five-Seven (FN ファイブセブン, FN Faibu Sebun?) is a semi-automatic handgun that Kirito uses as his secondary weapon in Gun Gale Online.

Kirito bought the FN Five-Seven from a weapon store under Sinon's recommendation due to its high accuracy after spending half of the money he had earned in the dodging game to purchase the Kagemitsu G4 photon sword.

Kirito first used the pistol in his battle against Uemaru to distract him long enough to close the distance between them enough to use his sword. Out of the 5 fired bullets, 1 hit Uemaru’s shoulder, another hit his abdomen while the remaining 3 hit the bushes. Although the two bullets only decreased about 10% of Uemaru's HP, Uemaru's moment of hesitation caused by the attack allowed Kirito to close in enough to imitate «Vorpal Strike» with his sword and finish off his opponent. Later, during the final preliminary match in the F block, Kirito ejected a bullet from the pistol’s magazine to use a starting mark for his and Sinon's showdown.

During the Bullet of Bullets finals, although Kirito had drawn the handgun in his encounter with Sinon, he holstered the weapon so that he could watch the fight between Dyne and Pale Rider. Afterwards, Kirito had forgotten about his secondary weapon until his battle with Sterben when Asuna held the hand of his real body to support him and the warmth of her hands reminded him of the existence of the handgun. Kirito then used the handgun to imitate a Dual Blades Sword Skill, «Double Circular», by using the Five-Seven to destroy Sterben's optical camouflage and then using his photon sword to slice Sterben in half. 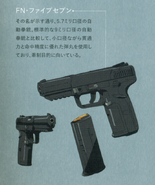