Not to be confused with the Forest of Wavering Mist.

The Forest of Wandering

The «Forest of Wandering» (迷いの森, Mayoi no Mori?) is a random transfer field dungeon (sub-dungeon) on the 35th Floor of Aincrad.

On the night between Christmas Eve and Christmas, Kirito comes to the Forest to look for the Christmas event flag boss, «Nicholas The Renegade», near a giant fir tree in a particular corner of the Forest, where he believes that the Boss will appear. Kirito is followed by Klein and the Fuurinkazan, who are followed by members of the Divine Dragon Alliance, into the Forest. While Fuurinkazan hold off the DDA members, Kirito confronts the Boss and is barely able to defeat it off-screen.

One day, Silica was fighting in this field dungeon with a party of six since morning, but, nearing the end of the day, when they were running low on potions and were returning to the city, she got into an argument with Rosalia, a spear user of the party, after which, she decided to leave the party and head out of the forest on her own. Unfortunately, only the leader of the party had the Map, so Silica ended up getting lost in the forest and encountered numerous monsters while wandering the forest, using up both her healing potion and crystal supplies. she eventually encountered 3 Drunken Apes, which killed her familiar, Pina, and would have done the same with Silica, if Kirito hadn't saved her. Eventually, they both use Kirito's Map to safely leave the Forest.

The Forest of Wandering in winter.

Moving between areas in the forest.

The giant fir tree in the distance. 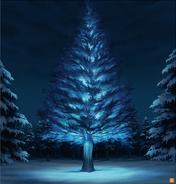 Nicholas's sleigh in the night sky.

The Forest of Wandering at night.