Fuurinkazan is a guild started by Klein and a group of his friends from the real world. They had waited in line for a long time in order for each of them to obtain one of the 10,000 copies of the game. All of the members of Fuurinkazan have known each other since before SAO started. Klein had protected and guided all of them, until all of them had become well-capable players on the front-lines.

Klein first mentions he was leader of the guild in a previous game to Kirito. Although Kirito wanted Klein to come with him to the next village to level up faster, Klein refused to because of his friends who were stuck in the plaza of the Town of Beginnings. After parting, Klein headed back to the plaza and found his friends, and, after a prerequisite quest was completed on the 3rd Floor, they formed the guild.

Kirito encountered the Fuurinkazan on the 28th Floor and saw the guild training against Blood Wolf Leaders in the «Wolf Plains». Several months later, Kirito tried to find the location of «Nicholas The Renegade» and the guild followed him so they could find out where the boss was hiding and to also fight it. The guild was however followed by the Divine Dragon Alliance, thus Klein and his guild helped distract them while Kirito tried to find the boss' hiding spot.

On August 2024, Fuurinkazan took part in the crusade against Laughing Coffin.

Fuurinkazan encountered Asuna and Kirito in the Labyrinth of the 74th Floor. They also found that members from The Army were attempting to handle the boss without a raid party. When Asuna and Kirito rushed to the boss room, the guild was interrupted by respawning monsters. While Klein and Asuna held The Gleam Eyes off to allow Kirito to equip his Dual Blades skill, the other members took the remaining Army players out of harm's way, saving the remaining members that were still alive.

Fuurinkazan was reformed after Sword Art Online was cleared. The members of the guild attended the SAO party to thank Kirito for freeing them from the cursed death game. 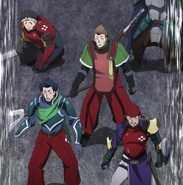