Sword Art Online Wiki
Register
Don't have an account?
Sign In
Advertisement
in: Pages to be adopted, Under Construction Articles, Characters,
and 5 more
English

Fatal Bullet DLC3[7]
Gabriel Miller (ガブリエル・ミラー, Gaburieru Mirā?), known as Subtilizer (, Satoraizā?, lit. "The one who steals souls") in Gun Gale Online and Project Alicization, and temporarily known as Vecta (ベクタ, Bekuta?) in Project Alicization, was the primary antagonist of the War of the Underworld sub-arc of the Alicization Arc. He is the chief tactical officer of «Glowgen Defense Systems» and the child of the former president and founder of the company. He played Gun Gale Online (GGO) and won the 1st and 4th Bullet of Bullets tournaments on the Japanese GGO servers. He later directly commanded the assault on the Ocean Turtle and used the Soul Translator to enter Underworld, first as Vecta, then as Subtilizer. 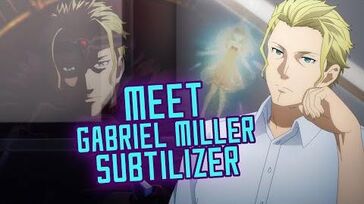 Gabriel Miller is six feet and one inch (185 cm) tall, has loose blonde hair that is swept back and has blue eyes. In the office, he wears a white dress shirt, dark grey slacks and custom-made cordovan shoes.[1]

Gabriel is utterly devoid of anything remotely resembling empathy, as exemplified by the murder of his childhood friend, in order to witness the nature of the soul, or his experiments on animals for the exact same cause.

Gabriel Miller was born in the Pacific Palisades district in the suburbs of Los Angeles, California, in March 1998. His father had a hobby of collecting insect specimens and the young Gabriel would seclude himself in the room to view the multicoloured insects with a magnifying glass. During such observations, Gabriel began thinking about what powered those beings. His father then showed him a video about mating praying mantises where the female would devour the head of her partner during the mating, but the insect would still continue to move despite no longer having a head. Since then he began thinking where was the soul of the insect housed in. After conducting numerous experiments on insects by demolishing various parts of their bodies in secret, he concluded that the insect's soul was spread throughout its body. Gabriel desired to see or even capture this soul. However, despite his numerous experiments in his secret laboratory, this wish would not come true.[1]

Gabriel then began thinking about the human soul. As humans could not live on without their heads, he concluded that their soul resided in the brain. He continued his thoughts about the human soul while analysing his childhood friend, Alicia Klingerman. Gabriel envisioned marrying Alicia one day to gain a glimpse at her soul, but, as the Global Financial Crisis of 2008 began, Alicia's family fell under heavy debt. As they were going to move to their kin in Kansas City, Gabriel decided to kill her before her soul lost its brilliance. On the day Alicia said her farewells at school, Gabriel invited her to the forest behind his home where his secret laboratory was hidden. There, when Gabriel and Alicia hugged, he took out the needle, which his father had used on his insects, to pierce through Alicia's left ear while holding her right ear. As Alicia died, Gabriel saw a small glittering cloud passing out of her forehead and thought that what he was seeing was her soul. Ever since then he was obsessed with the human soul.[1]

Gabriel showed great interest in the FullDive technology created in Japan in his pursuit of souls. He even began studying Japanese and fought against Japanese players in Gun Gale Online as Subtilizer.[1] He was a legend amongst GGO players, as he was able to win the 1st BoB tournament with just a knife and a handgun and win the 4th BoB tournament without bringing any weapons of his own, using the «Army Combatative» skill to grapple to his opponent, steal the player's weapon and use it to kill his target. He was somehow able to predict the moves of his targets to ambush them at extremely close range and to kill them before they were even able to use their weapons against him.

One day, his company was approached by the National Security Agency and they were requested to participate in an operation to assault the Ocean Turtle to obtain the Soul Translator technology secretly developed there. Hearing about the technology to interface with the human soul and that it had already succeeded in duplicating a human's soul, Gabriel volunteered to lead the operation himself.[1]