Sword Art Online Wiki
Register
Don't have an account?
Sign In
Advertisement
in: Pages to be adopted, Under Construction Articles, Characters,
and 2 more
English

Alicization Episode 07 (Cameo)
Garitta (ガリッタ, Garitta?) was the sixth generation cutter of the «Gigas Cedar» in the outskirts of Rulid Village, and the last cutter before Eugeo and Kirito were assigned this «Sacred Task».

Long ago, Garitta lost his wife to a drowning incident. Because of her death, Garitta went into a state of extreme lamentations, which caused him to lose over half of his memories regarding his wife.[1]

Garitta was now an old man with a deeply wrinkled face and a white mustache. His backbone was extremely straight and his eyes had a glint. As a parting gift, he instructed Eugeo to chop down a branch from the «Gigas Cedar» that could be made into a sword if brought to his friend Sadore. Eugeo thanked him before the young former woodcutter and Kirito left for Centoria to save Alice. 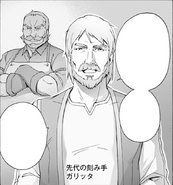 Garitta instructing Kirito to bring a branch of the Gigas Cedar to a craftsman named Sadore.