SII Episode 02
Ginrou (ギンロウ, Ginrou?) is an AGI-type player in the VRMMORPG, Gun Gale Online. He is a member of Dyne's PvP (anti-personnel) squad that targets weaker, low-risk opponents. Ginrou's evasion skills in face-to-face combat is known to be above average.[3]

Ginrou is a cocky player, as he underestimates the power of his opponents and believes that he can easily keep them occupied at close range to stall for time.[4] Ginrou is also a person who tries to hit on women, though has never succeeded in both the virtual world, nor the real world.

While waiting for the Mob hunting party to show up, he attempted to invite Sinon for a cup of tea, but was rejected, because Sinon thought that he was not worth remembering.

Ginrou later leads a group of 3 attackers from the squadron against the Mob hunting party, but is the first one to be killed by Behemoth's Minigun fire. 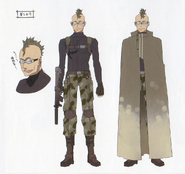 Ginrou under fire by Behemoth.