Granzam (グランザム, Guranzamu?) is the main settlement of the 55th Floor of Aincrad and the city where the Headquarters of the Knights of the Blood is located. Granzam is home to a large number of blacksmiths, so the player population is rather high.[1]

Granzam is also known as the Steel City, because of it being mostly composed of huge towers made from black steel. However, it is noted for its lack of greenery, trees, and flora. The weather is generally very cold, and it is particularly unforgiving in harsh winter winds. The road is made of steel plates locked into position with rivets.[1]

Asuna and Kirito arrived to the city on October 19, 2024 in order to meet with Heathcliff about Asuna's request for a temporary leave. After becoming a member of the KoB, Kirito came to the city to report for duty at the KoB headquarters on October 23. After the incident with Kuradeel, Asuna and Kirito took a break from the guild and only returned to the city two weeks later on November 7, when Heathcliff requested their help with the 75th Floor's boss.

Knights of the Blood Headquarters in the anime.

The western gate of Granzam.

Knights of the Blood Headquarters in the Aincrad manga.

Concept art for the headquarters of the Knights of the Blood guild from the Design Works art book. 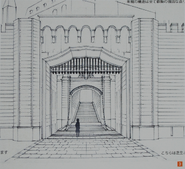 Concept art for the gate of Granzam from the Design Works art book.

A page from The Perfect Guide Animation Sword Art Online for the Headquarters of the Knights of the Blood.
Add a photo to this gallery