Volume 8, A Murder Case in the Area, Part 4 (Mentioned)

Episode 05 (Mentioned)
Griselda (グリセルダ, Guriseruda?) was a supporting character during the Aincrad Arc. She was one of the 10,000 players who were trapped in «Sword Art Online», the leader of the «Golden Apple» guild before its dissolution, and the wife of Grimlock both in-game and in the real world.

Griselda was a young woman with brown hair. In Sword Art Online, she wore a white and green tunic with a chestguard, knee-length, brown shorts and leggings, and a cape with a hood.[1] In battle, she wielded a long-sword and shield.[2] In the real world, she wore a sweater.[3]

Before coming to Sword Art Online, Griselda used to be a quiet and obedient person who never quarreled. However, when the death game began, she began to grow more independent, and even opposed Grimlock's decisions, such as creating a guild, and going off to train with her enlisted guildmates.[2] According to Schmitt, Griselda was very fierce and determined. She was also extremely strict to injustice and craftiness.[4]

Around the beginning of Autumn 2023, Griselda and the other members of Golden Apple became embroiled in a dispute when they managed to acquire a valuable agility-boosting ring from a rare lizard monster in an unremarkable dungeon on the middle floors. At the end of a heated debate regarding the fate of the ring, five of the eight members, including Griselda and Grimlock, voted to sell the ring.[5]

Since the ring was too valuable to be sold to the merchants on the middle floors, Griselda left for a large city on the frontlines and stayed the night at an inn, planning to find a reliable auction house to sell the ring at the following day.[5] At 01:00 that night,[5] she was assassinated by members of Laughing Coffin, hired by her husband.[2]

On April 23, 2024, after the mystery of Griselda's murder was solved, a manifestation of her emotional data saved by the Cardinal System[6] appeared before Kirito and Asuna, thanking them for their assistance in revealing the mystery behind her death. The manifestation extended its right hand to them, seemingly wanting to give them something, filing them with a warm sensation upon touch. As both promised to clear the game, Griselda disappeared with a smile. 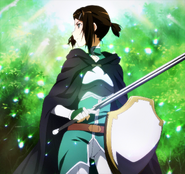 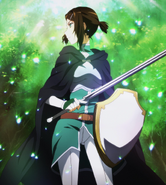 Cheerful and full of life Griselda from Grimlock's memories.

Real life Griselda in Grimlock's memories after being accused of mistaking possessiveness for love.