Sword Art Online Wiki
Register
Don't have an account?
Sign In
Advertisement
in: Non-Canon, Pages to be adopted, Under Construction Articles,
and 6 more

Fatal Bullet
Hoshiyama Midoriko (, Hoshiyama Midoriko?), known as Zeliska (ツェリスカ, Tsērisuka?) in Gun Gale Online (GGO), is an original Sword Art Online game character and one of the heroines in Sword Art Online: Fatal Bullet. She is a very skilled Gun Gale Online player, yet is very mysterious in her nature. Despite being known by many GGO players for her high skill, she does not appear on any Ranking Leaderboards,[5] leading[citation needed] other players to refer to her as the Uncrowned Queen (無冠の女王, Mukan no Joō?).[5]

Midoriko's avatar Zeliska has red eyes, white hair that rests on her left shoulder, a small mole below her left eye, and a single earring on her left ear.[citation needed] Her outfit is prominently in royal purple, featuring white patterns. Her belt is accompanied by two pouches on the right side of her hip.[citation needed] Her canon choice of weaponry is an optical shotgun called Peacock as her primary,[6][7] as well as an MG Karymsky that resembles a real life PKM (Kalashnikov's Machine-gun Modernized) as her secondary.[6][8]

Zeliska is a mysterious character who is not very revealing about herself but is very frank when talking about others. She does not avoid being honest and direct in a conversation, if she believes that to be the right thing to do. This also correlates with her mature and supportive attitude towards the people she cares about. She has a very tranquil and focused personality and rarely loses her calm, even in the gravest situations.[citation needed]

Zeliska has a preference for cute outfits[9]; however, due to being very self-conscious about the style of her outfits[10], Zeliska instead prefers to dress her ArFA-Sys Unit Daisy in such outfits,[9] assuming that they would not look good on her.[10]

One day, Zeliska encountered the Protagonist and his ArFA-Sys Unit in SBC Glocken, conversing with her own ArFA-Sys Type-X unit, named Daisy. As the new player was still unfamiliar with Gun Gale Online, Zeliska approached them out of concern that they might be neglecting their Artificial Intelligence (AI) companion. When her fears were proven misguided, the woman expressed her interest in interacting further with the pair in the future, before departing the area with Daisy.

Some time later, Zeliska and Daisy found Afasys, the Protagonist's ArFA-Sys Unit, lingering in front of a store in SBC Glocken due to lacking funds to purchase equipment for their master. As Afasys was unable to find their way back to the Protagonist's residence, the two escorted them back home. There, Zeliska scolded the Protagonist for leaving Afasys unsupervised, only to discover that the new player was ignorant of the ArFA-Sys units' allowance function. To prevent the issue from repeating itself, the woman explained the mechanics of the system to them, before taking her leave with Daisy.

Having heard an announcement that a new area called the SBC Flügel would be implemented in an update soon, Zeliska hoped to join both the Protagonist and Afasys in exploring it upon release. To that effect, she advised the Protagonist on where and how to find certain components their Afasys would need to unlock the new area.

Zeliska's character page from the Art of Fatal Bullet 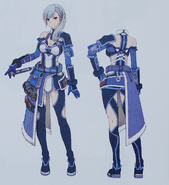 Zeliska in the invisibility outfit

Zeliska in a Victorian era dress

Zeliska and Sinon in the True Ending

Zeliska with other members of the SAO cast on a visual for the SAO Beater's Meeting 2019 event.