Sword Art Online Wiki
Register
Don't have an account?
Sign In
Advertisement
in: Pages to be adopted, Under Construction Articles, Characters,
and 2 more

Alicization Episode 28
Iskahn (イスカーン, Isukān?) was a supporting character in the second half of the Alicization Arc, War of the Underworld. He was the Tenth Champion (第十代チャンピオン, Dai Jū-dai Chanpion?) and leader of the Pugilists Guild, as well as a member of the Ten Lords Assembly that controlled the Dark Territory.[1] Iskahn was one of the leaders of the Dark Territory who participated in the battle at the Great Eastern Gate against the Human Guardian Army, commanding the unit of Pugilists. During the battle, Iskahn and his Pugilists were ordered to pursue the decoy unit of the Human Guardian Army when they escaped southwards into the Dark Territory, where Iskahn dueled against Scheta Synthesis Twelve and became interested in her.[5] 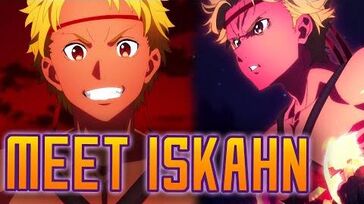 However, when Emperor Vecta ordered his Pugilists on a suicide mission and apathetically left them to their doom as tens of thousands of American players descended on the battlefield and began slaughtering his people, Iskahn decided to use the loopholes in the Emperor's orders to form an alliance with the decoy unit of the Human Empire Army. As the majority of the Human Guardian Army proceeded further south in pursuit of Vecta, Iskahn and his forces remained on the battlefield with Scheta to continue to repelling the American player army.[6] Iskahn was one of the members of the Dark Territory Army who survived the war, in the aftermath of which he became the supreme commander of the Dark Territory Army.[2]

Iskahn was a young man with curly, red hair[1] and a reddish-copper tanned body.[5] As a Pugilist, Iskahn wore skin-tight leather trousers, sandals, a single leather belt on his torso, and metal-studded gloves.[1] Despite not using any armour or weapons, Iskahn's body was so tough due to his training at the Pugilist guild that even his eyeballs would be able to withstand a two centimetre-wide blade.[5]

Initially, Iskahn was a man who cared only about his body, uninterested in anything other than strengthening it. The young man had trained his body so extensively that he had absolute confidence in his body being capable of repelling even large-scale Sacred Arts. Due to his Pugilist upbringing, Iskahn regarded anyone who used armour to defend themselves, as well as people lacking in musculature such as Scheta, with contempt and had thus been utterly disinterested in the Human Empire. On the other hand, Iskahn respected true fighters, such as Dark General Shasta, and would be excited to fight against those who trained their bodies and displayed fighting spirit.[5]

Iskahn also cared greatly about the pride of his guild as warriors. He did not mind dying valiantly in battle, especially against opponents as powerful as Scheta; however, he did despise when she showed his people mercy by only greatly injuring them, even though she was fully capable of killing them.[5] Iskahn also loathed when his fellow Pugilists died in vain, rather than honourably in battle, such as by falling to the abyss while attempting to cross a large fissure on a suicide mission ordered by Vecta.[7]

The young Pugilist also believed that a ruler was beholden to taking responsibility for those they commanded. He believed that it was the ruler's duty to care for the lives of their subjects as they led them to prosperity. Emperor Vecta's apathy towards the lives of his people disgusted Iskahn to such an extent that he began questioning the emperor's orders, leading to him eventually destroying his right eye to be less restricted by the Seal of the Right Eye in order to be capable of indirectly opposing the orders.[6]

Iskahn was born into a tribe of Pugilists, a guild that had spent hundreds of years exploring the capabilities of the physical body, surpassing its limits by strengthening their own bodies with incarnation. Like all Pugilists, Iskahn began training at the age of five, snapping progressively tougher blades with his fists while withstanding slashes from weapons without protection. Through this training, Iskahn and the other Pugilists learnt absolute confidence in the resilience of their own body, this strong image about themselves allowing them to use Incarnation to strengthen their body to be as strong as steel.[5]