A black Kagemitsu G4 with a purplish-blue energy blade[1] was purchased by Kirito and used as his primary weapon in Gun Gale Online.

A Kagemitsu G4 is a metal, tube-like weapon[1] that is 3.5 centimeters in diameter and 19.8 centimeters long.[2] On one end, a metal tool that looks like a mountaineering carabiner hangs down.[1] The aperture end is slightly thicker with a black hole in the center.[1] The colour of the weapon can be customised, with twelve choices available[2], and the energy blade emitted is one meter long.[1]

Compared to ordinary swords, the 800 gram[2] Kagemitsu G4 is lighter in weight, which is its main advantage in GGO.[1] However, it also has continuous usage limits due to overheating, as well as battery limits.[3]

Kirito bought a «Kagemitsu G4» because it was the only weapon he had found that resembled a sword, which he preferred as he was used to clashing with swords in Sword Art Online and ALfheim Online. Kirito was quite proficient with this saber, as he was able to slice up bullets flying at him. Despite being a photon sword, it is unable to cut through all materials, as shown when pitted against the Starship Metal Estoc.

Parts of a Kagemitsu G4 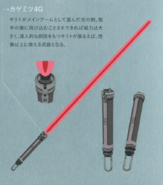 Kirito choosing the colour of his photon sword.