Sword Art Online Wiki
Register
Don't have an account?
Sign In
Advertisement
in: Citations needed, Non-Canon, Pages to be adopted,
and 9 more
English

Lost Song
Karatachi Nijika (枳殻 虹架, Karatachi Nijika?), known as Rain (レイン, Rein?) in «ALfheim Online» (ALO), is a game-original character featured in the game adaptation Sword Art Online: Lost Song. Nijika's ALfheim Online avatar is a Leprechaun, who can dual wield like Kirito; however, she is actually a multi-wielder. 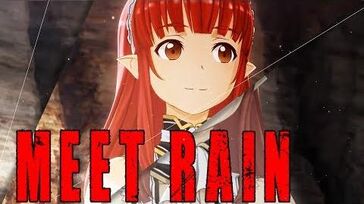 Before logging into ALfheim Online, Nijika lived a happy life with her parents and younger sister, Nanairo Arshavin (Seven), in Russia. However, when it became apparent that her sister's genius was blooming, her parents argued about the future they wanted for her, their father wanting to nurture her genius, while their mother wanting her to live a normal life. The family eventually divorced, with Nijika moving back to Japan, while her father gained custody of her sister, who lost all memory of her mother and sister as she grew up in America.

While living in Japan, Nijika became infatuated with pop culture and had a part time job working for a maid cafe in Akihabara. She dreamt of becoming an idol to one day stand alongside her younger sister with pride. Despite the love for her younger sister, her sister's success sparked jealousy in her heart. Nijika eventually became one of the 10,000 victims of Sword Art Online (SAO), and survived the game on her own. In the aftermath, she met with Kikuoka Seijirou, whom she asked for information regarding her younger sister.

As Kirito and his friends went about their adventures through the first two islands, Rain was secretly spying them and became more and more impressed with them. Kirito only started noticing her spying around Wellgunde, the desert island, despite having strange feelings of being watched throughout his travels.

When Kirito, Asuna and Leafa traveled alone together to Wellgunde after the others had logged out for the day, they heard Rain's scream, and hurried to save her from attacking harpy monsters. Afterwards, Kirito easily identified her as their stalker, despite her lies that she was a newbie player, by exposing that her equipped boots matched those of the footprints she had previously left behind. With the truth exposed, Rain finally introduced herself to them, and shared that she had learnt about Kirito's and Asuna's skills from reading about them on web forum boards, calling Kirito the hero of Sword Art Online. In the aftermath, Rain was invited to join them by Kirito, a decision that Asuna and Leafa later agreed to as well.

As they continued their mission to clear Wellgunde, Kirito eventually became able to sense when Rain was nearby, thus he would call out to her even though she was hiding. As time passed by, Rain began meeting the others in his group each time this happened. It was not until Flosshilde that Rain came out of the shadows to help her new friends and joined the party, noticing that Shamrock was beating them to the treasures in the dungeons. With aid from Rain, Kirito's party managed to complete a quest ahead of Shamrock. However, it was not long until Shamrock's de-facto leader, Sumeragi, realised the truth. When Kirito chose to duel Sumeragi, he identified Rain before everyone as "Rain the Liar", a former Shamrock guild member who joined the guild by means of deception and was expelled for it, but not before using her remaining credentials within the group to steal information from them. Kirito and the others returned to town afterwards.

When facing Rain about this, Sinon was the first to oppose her. However, Kirito and Yui both realized that what Sumeragi said about her could not be true, as she would have lost her credentials the moment she was expelled from Shamrock, and thus could not have truly done what he had accused her of. Kirito then convinced everyone to keep Rain in the group.

Rain continued to support Kirito and the others as they traversed the other dungeons, and eventually reached Niflheim, the final dungeon. She was present when Kirito refused Seven's invitation to join Shamrock and help with her plan to create the Cloud Brain. She was somewhat shocked when she heard Kirito speak of a person in real life, later revealed to be Nijika, expressing her innermost feelings with her songs in public, but ultimately ignored, compared to the attention Seven gained from her fans.

As the Kirito's party traversed the final dungeon on Niflheim to confront and stop Seven's plans, Rain's complete history was revealed when Kirito once again exposed her in front of Asuna and Leafa, after having contacted Kikouka Seijirou in real life. Rain revealed that she wanted to join Shamrock in order to get closer to her sister, and to start rumors that would instigate trouble. However, when that plan failed, she sought out Kirito's group in hopes that their power would be enough to defeat Shamrock and help her reach her sister. With Rain having revealed her motives to the group, they welcomed Rain as one of their own.

Prior to the final battle with Seven, Rain could not stand the kind of person Seven was becoming, thus Rain slapped her. Rain then asked whether Seven's actions as an idol were honest, or if she had just been acting for her plan, like how she stole the Original Sword Skills of fallen Shamrock members for her own usage. When Seven's avatar became corrupted from the overwhelming mass of Original Sword Skills, Rain joined the battle but became unable to fight as she did not want to hurt her sister any further. When the battle was over, Rain easily deduced that it was the overwhelming stress of expectation that finally broke Seven's spirit, thus she embraced her sister, letting Seven cry on her elder sister's shoulder.

Days later, Nijika decided to pursue her dreams of becoming an idol. It was not long until Kazuto found her in the real world and spoke to her about her reasons for quitting ALfheim Online. Eventually, he persuaded her to return to ALO, and they met at the Island of Meadows. There, Kirito challenged Rain to a duel, knowing that she was holding back somewhat due to being a Sword Art Online survivor who survived the game on her own. During the battle, Rain showcased her «Thousand Rain» skill, which was only possible by using her Leprechaun magic to draw out numerous weapons from her inventory simultaneously. Despite this great skill, Kirito still managed to defeat her.

It was at this point that Seven appeared, having been invited by Kirito. As the victory condition of their duel, Kirito wished for Rain to speak with Seven, as he desired for his friends to be happy, knowing all along that Rain wanted to tell Seven the truth sooner. At that moment, Rain finally told Seven about their life as sisters, reminding her of how she had taught Seven the greeting words that she had used. As Seven processed Rain's words, Seven eventually remembered her life with her family, hugged her older sister, and both introduced themselves to each other. Rain thanked Kirito, who responded by telling her that she was welcome to join his friends in ALO anytime.

Rain joined the party for one final post-game event battle, where the entire group headed to Niflheim to challenge a new event quest boss. Throughout their journey in the dungeon, a voice spoke to them telepathically, asking how the players had managed to reach the point that they were at that day. Upon reaching the end, Rain and Seven both speak about how their lives had changed for the better after meeting Kirito and his friends. The voice then introduced itself as «Lost Song», the most powerful event boss of the game. After defeating it, the group returned to Agil's cafe, where Seven revealed that Rain and her mother were coming to visit her in America very soon.