Editor of an information magazine about computers (コンピュータ系情報誌の編集者)[1]

Episode 1 (Cameo)
Episode 15 (Actual)
Kirigaya Midori (桐ヶ谷翠, Kirigaya Midori?) is the mother of Suguha, as well as the aunt and adoptive mother of Kazuto. She is an extremely busy woman and leaves the two kids to take care of themselves, only coming back home late in the night and leaving early in the morning, though she still shows love and care for them.

Midori adopted Kazuto in 2008, after her elder sister's death, and kept it a secret from the two children until Kazuto discovered the erased documents in the National registry in 2018. She herself also played virtual games like Kazuto, yet never reached the level of seriousness that Kazuto had.

While Kazuto was trapped in Sword Art Online, Midori and her husband Minetaka revealed the truth about Kazuto being an adopted child to Suguha at the hospital. They had been planning to wait until Suguha was in high school to tell her, but the possibility of Kazuto dying while in the game motivated them to do it sooner, while he was still alive. 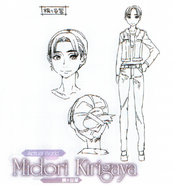