Episode 03 (Mentioned)
Episode 05
«Knights of the Blood» (血盟騎士団, Ketsumei Kishidan?, lit. "Knights of the Blood Oath") was a medium-sized, high-level clearing guild in «Sword Art Online» (SAO). Consisting of about thirty high-leveled members who were all greatly experienced in battle, the guild was acknowledged as the lead guild in SAO. Their uniforms are styled in red and white to symbolize their guild.[1]

After the boss battle of the 25th Floor, the clearing group endured major casualties due to the boss of the Floor being stronger than expected, as well as the Aincrad Liberation Squad (ALS) rushing into the boss battle after having been given false information about the boss. After the battle, the group's size was reduced to two-thirds of its size due to the large number of deaths and the remaining ALS members leaving the front lines. Therefore, the outcome of the battle put the clearing group into a state of great despair.[2]

At this point, the need for a new guild leading the battle and motivating the players on the front arose and the Knights of the Blood were formed,[2] with its leader, Heathcliff, personally inviting the first members.[3] Proudly marching in at the time of the first field boss strategy meeting on the 26th Floor with customized white and red equipment with Asuna, the second in command, standing at the head of the group, the newly-formed guild greatly increased the morale of the clearing group and has stood at the front lines ever since.[2]

Their base is located in the 55th Floor living area, a city known as the steel city «Granzam». Their headquarters is a huge steel tower with silver spears above the gate and white flags with red crosses swaying in the wind (red flags with white/bronze swords in the anime).[4]

Before October 8, 2023, the guild's original base was located in Giltstein on the 25th Floor.[5] Sometime between then and October 15, they moved to a small rural mansion on the outskirts of Nolfret on the 39th Floor.[5] However, the guild eventually had to relocate to Granzam, as their rural mansion at Nolfret was too small and crowded for extended use.[4] 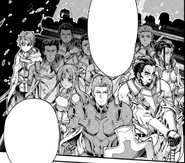 Members of the Knights of the Blood guild in OS manga chapter 05.