A Last Attack (, Rasuto Atakku?, abbreviated as LA) is the final strike on rare monsters, such as bosses or sub-boss-class monsters[1]. A player who deals the Last Attack on monsters receives more experience,[citation needed] as well as a special bonus rare drop. 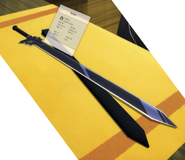 Retrieved from "https://swordartonline.fandom.com/wiki/Last_Attack?oldid=165082"
Community content is available under CC-BY-SA unless otherwise noted.