Episode 06
«Laughing Coffin» (, Rafin Kofin?), frequently abbreviated as LaughCof (ラフコフ, LaughCof?), is an infamous Player Killing orange guild in «Sword Art Online», but due to the intensity of their Player Killing activity, are dubbed by the players as a "red guild".

Laughing Coffin is a guild started by PoH and other orange players. Before the foundation, they were simply orange players that surrounded solo players or small player groups they ambushed to steal their items in exchange for their lives, however, such encounters did not result in murder. At some point, PoH started spreading the belief that it was all right to kill others. As the orange players admired PoH for the opposite reason that the clearers admired Heathcliff, more orange members joined their ranks.[1]

On New Year's Eve in 2023, the guild, who already had thirty members, decided to make themselves publicly known and to do so, they attacked a small guild having a party in the field and killed all of the players, causing the first murders in Sword Art Online's history. The next day, January 1, 2024, information about the guild reached the main information providers in Aincrad.

A Murder Case in the Area

On April 19, 2024, the guild was hired by Grimlock to kill Schmitt, Yolko and Caynz to close the case of Griselda's death as he was worried that they would eventually find out that he had hired the guild earlier to kill his wife. PoH, XaXa and Johnny Black were sent to kill the three, but were eventually foiled and driven away after Kirito told the three reinforcements were coming soon.

By August 2024, the guild had already killed hundreds of players, thus they were now the number one threat against the Clearers. The Clearers tried to negotiate with them via messengers, but the guild killed every one that they sent. After realizing that they would never stop killing and finding out the location of the guild's headquarters from a member of the guild, the clearers formed a high-level crusade party to wipe the guild out. Fifty high-leveled players (including Kirito and Asuna) went to attack them, however, just before they reached the designated location, the Laughing Coffin members were warned about the incoming party, so they decided to ambush the crusaders instead. Although some of the crusaders were unable to kill the red players, as the guild would not yield, some of the crusaders finally took the initiative of finishing off the Laughing Coffin members. At the end of the battle, twenty-one Laughing Coffin members and eleven crusaders had died, with most of the remaining Laughing Coffin members, including XaXa and Johnny Black, being arrested by the clearers and sent to the Black Iron Palace prison. Somehow, PoH was not found in the list of deceased or captured members, making him the only one to escape the crusade.

Although the guild was vanquished during the crusade, PoH, who avoided the crusade, watched Kirito and Kuradeel's duel on the 74th Floor. After hearing that Kuradeel wished to kill Kirito, PoH approached Kuradeel some time prior to Kirito's mandatory training session with Kuradeel and Godfree. PoH then invited Kuradeel to his guild and taught him how to make paralysis poison. 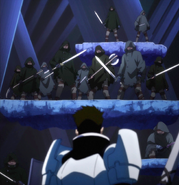