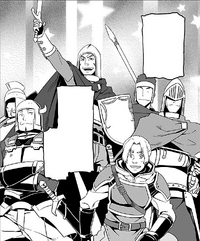 The Legend Braves (レジェンド・ブレイブス, Rejendo Bureibusu?) is a group of players who were trapped in Sword Art Online and were planning to make their group an official guild later on in the game. The group was responsible for a strengthening scam in the early stages of the game.

The Legend Braves was formed for a simple NerveGear action game three months before the release of Sword Art Online. The group stuck together as they planned to all switch to playing Sword Art Online once it came out. However, one of their members, Nezha, had a case FullDive Non-Conformity, which impaired his depth perception in the virtual world. When Sword Art Online became a death game, the guild attempted to help Nezha to train his Blade Throwing skill so that he could still be a fighter in the game, but the skill proved to be barely effective as a main combat skill, thus Nezha eventually had to resign from being a fighter. However, due to helping Nezha, the other members of the guild had a slow start, leading to a large level gap between them and the clearers. While Nezha was considering to become a blacksmith, a mysterious man approached the group and informed them of a trick that they could use to make more money.[1]

The trick involved scamming other players by offering to upgrade their weapons, but switching out the customer's weapon with a duplicate that had no more upgrade attempts by using a weapon mod named «Quick Change» while the customer was distracted by the lights of the furnace, and then attempting to upgrade the spent weapon, causing it to be destroyed. Although the group was not interested in the trick as it was a crime, the mysterious man convinced them that if it was against the rules, the method would have been made impossible by the programmers.[1]

Rondo of a Fragile BladeEdit

Due to their scam, the Legend Braves quickly earned enough cor to purchase high-level equipment, which allowed them to join the ranks of the front line players. However, during one such scams, Kirito realised that there was foul play involved in the supposed loss of Asuna's Wind Fleuret. Kirito and Asuna soon discovered the technique used for the scam and the two confronted Nezha after Kirito used a disguise to get Nezha to repeat the scam. After the discovering what led to the scheme and Nezha’s predicament, Kirito helped Nezha by directing him to the Martial Arts quest and giving him a chakram, a throwable weapon that returned to the user on its own, making the Blade Throwing skill more useful in battle. After learning the Martial Arts skill needed to use the weapon, Nezha joined the 2nd Floor boss battle while it was underway and helped defeat Asterius the Taurus King.

In the aftermath of the battle, the players that Nezha had deceived confronted him, and Nezha revealed the existence of the scam, but did not reveal that the members of the other members Legend Braves were involved. When a certain member of the crowd provoked the thought of murder as a punishment for the crime, the other members of the Legend Braves stepped up, revealed their involvement in the crime, and offered their equipment to pay for the damage. With this, the matter was resolved peacefully.

Retrieved from "https://swordartonline.fandom.com/wiki/Legend_Braves?oldid=168928"
Community content is available under CC-BY-SA unless otherwise noted.