The Legrue Corridor (ルグルー回廊, Rugurū Kairō?) is a cave dungeon in ALfheim Online. The dungeon prevents flight inside of it due to the lack of a source of sunlight or moonlight and it can not be flown over due to the mountains reaching above the altitude limit; thus, it is one of the few means to reach the town of Legrue and the Alne Plateau, at the center of which stands the World Tree.

The Legrue Corridor is a long cave tunneled through the mountain range blocking the path from Swilvane to Alne. The cave entrance is square-shaped that is cut into the face of a cliff. The entrance in width and height is three to four times larger than a fairy and is decorated with monster designs carved around the entrance. The upper part of the entrance has a huge devil's head sticking out, looking with contempt into the eyes of all intruders.

Most of the corridor is a monotonous dark, rocky cave with several stalagmites dotting it. The corridor eventually leads to a large, open cave with an underground lake and the city of Legrue in the middle of it. The cave itself is filled with an innumerable amount of various colour crystals that make the cave walls look as if they were covered in a mist of various colour light.

As Kirito seemed to be in a hurry to get to the World Tree in Alne, Leafa decided to travel through the corridor to the Alne Plateau instead of taking the longer route through the Norther Pass. As they arrived at the corridor and stepped deeper into the cave, Leafa asked Kirito to use his race's special magic to light their way through the cave, thus, with Yui's help, Kirito cast a spell that granted night vision to the two.

After two hours of navigating the cave and battling with orcs over ten times along the way, while Kirito used the spare time to read up on the incantations of spells, Leafa suddenly received a message from Recon, warning her to be careful. While Leafa was trying to make sense of the message, Yui suddenly warned them that a group of 12 players was approaching them, thus Leafa decided to use a concealment spell to allow them to hide and let the group pass.

However, when she realized that a high-level Salamander tracer was following them, she immediately ran out of their hiding spot and destroyed the tracer. She then urged Kirito to start running towards the city where they could not be attacked due to it being a neutral city.

Kirito immediately asked Leafa to take the role of a support so that she could heal him when he took damage so that he could go all out head-on against the Salamanders. However, each time he attacked the group, the front line soldiers with shields would block his attack, the front line mages would heal the soldiers, while the back line mages cast fireball firing spells, dealing heavy damage to Kirito. As Kirito would not give up in his struggle despite Leafa telling him that they could just start over from Swilvane, Yui, having noticed that only the mental states of the players could be used to defeat them, asked Leafa to protect Kirito from the next magic attack. Although having doubts, Leafa agreed to try Yui's plan and cast a shield-type spell that absorbed the damage that Kirito was about to face.

Meanwhile, Kirito used the opportunity to cast a spell of his own that turned himself into a huge demon-type monster that resembled The Gleam Eyes. This form change frightened the Salamanders, thus leading to them breaking their formation and allowing Kirito to easily pick them off. With most of the Salamanders killed, the leader of the party jumped into the lake out of fright while the last Salamander was kept alive for information. After negotiating with the Salamander to tell them what he knew in exchange for the items Kirito received from the Salamanders he defeated, they went into the city.

Awhile later, Kirito and Leafa rushed out of town after hearing about the Salamanders' plan to attack the conference of the Sylph-Cait Sith alliance. With Kirito's speed, they rushed through the monsters at an alarming rate and soon reached the exit of the cave.

The entrance to the Legrue corridor in the anime. 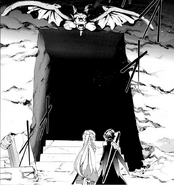 The entrance to the Legrue Corridor in the manga.

The cave in Legrue Corridor where the city of Lugru is built.

The path leading to the city of Legrue.

The bridge leading to city of Legrue.

Legrue from a distance.
Add a photo to this gallery