Lindarth (リンダース, Rindāsu?) is the main settlement of the 48th Floor of Aincrad. The city is characterized by its abundance of canals, waterwheels and support-class shops.

Lindarth is a medieval village-town themed city, with a rural and tranquil atmosphere. The spacious city has stone paved roads with large trees planted in regular spaces along it, the court covered in grass and canals threading the road. Due to the waterways and canals running beside the houses, quite a few buildings in the town have waterwheels, some even more than 1, which makes the town ideal for support-class shops, like bakeries, tailor shops and smith shops, as the waterwheels can be used to power large-scale devices, like flour mills for bakers, looms for tailors or bellows or a sharpening wheel for a smith. Most of the buildings within the town have thatched or ceramic-tiled roofs and the city itself is surrounded by gently curving castle walls.

A Murder Case in the AreaEdit

In April of the 2nd year in Sword Art Online, after inspecting the Monument of Life and splitting up with Asuna for the night, Kirito comes to Lindarth, where his current accommodation is located. At the Teleport Gate, Kirito is surrounded by several members from the Divine Dragon Alliance, forming a semicircle around the Gate. Schmitt who has gathered this group of his guildmates for numbers, demands Kirito to reveal what he has found about the murder incident in Marten as well as to give him the murder weapon. After Kirito does so, Schmitt tells him to stay out of the incident and leaves with his guildmates.

In June of the same year, Asuna comes over to Lisbeth’s Smith Shop in Lindarth to sharpen her rapier before meeting Kirito. At noon the next day, Kirito, referred by Asuna, comes over to the same shop in Lindarth to have a new sword crafted. After Kirito breaks Lisbeth’s best sword and gets her so mad that she tells him to help her with gathering materials, they leave for the West Mountain on the 55th Floor and return only the next noon.

Lindarth church tower from a distance. 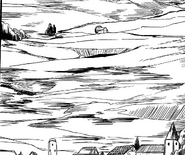 Lindarth in Extraordinary Ordinary Days.
Add a photo to this gallery