Alicization Episode 27
Lipia Zancale (リピア・ザンケール, Ripia Zankēru?) was a supporting character in the Alicization Arc. She was the eleventh-ranked dark knight in the Dark Territory in Underworld, serving as Dark Knight Commander Vixur Ul Shasta's subordinate. Lipia loved her commander and supported his ideal of peace.[5] When this ideal was threatened by the sudden reappearance of Emperor Vecta, Lipia attempted to assassinate the man in order to salvage her commander's plans but failed in her attempt and was killed as a result.

Lipia had ashen-blue hair[5][2] and eyes[2]. According to Vecta, her face possessed exotic beauty; her cheekbones had features typical of Northern Europe that gave the impression of nobility, despite her darker skin shade.[2] On duty, Lipia wore a jet-black full body armour, which had scratches in numerous places but was polished thoroughly.[5]

Lipia was one of the few people in the Dark Territory who questioned the sole rule of their land to plunder with strength, but lacked the wisdom to put her uncertainties into words at first. In her time working for Vixur Ul Shasta, Lipia began supporting Shasta's idea of the necessity of peace to improve their world. Lipia supported Shasta and his beliefs to the extent of attempting to assassinate Vector, who endangered the future that Shasta sought, of her own accord.

Lipia was also a highly loyal and determined person. Despite failing her assassination attempt and suffering intense pain, the determination in Lipia's eyes remained unchanged and she lied about not having any superiors to not endanger Shasta.

Lipia was born after a peace treaty in the Dark Territory was established, thus she avoided becoming a slave despite being small as a child. Although the majority of human women in the Dark Territory went to the dark arts guild after finishing preparatory school, Lipia went to a cadet school to become a dark knight instead, discovering her late blooming talent for the sword and practically reaching the highest position a human female could hope for. After becoming a knight, Lipia began managing an institution similar to a nursery that cared for infants abandoned by their parents from remote regions, where slave trafficking was still rampant.[5]

After confirming Quinella's death, Lipia returned to the Obsidia Palace to report to her commander, Vixur Ul Shasta. Resisting her personal desires, Lipia informed him about Quinella's death. Hearing this news and that Lipia had confirmed its validity, Shasta claimed that it was their chance for peace and began explaining why it was needed. Lipia then asked how was Shasta planning to persuade the other lords and whether the Integrity Knights would accept peace. Hearing that Shasta would have to kill four other lords, including D.I.L., Lipia expressed her concern for Shasta's safety. After a short moment of silence, Shasta changed the topic and proposed to Lipia, but they were suddenly informed of the throne room lock quivering.

That night, Lipia visited Vector's bedroom disguised as his attendant in an attempt to assassinate him with a knife hidden in her hair; however, her hand was caught by Vector before she could succeed in her attempt. Although Vector attempted to interrogate her while sealing her movements, Lipia refused to answer his questions, thus she was killed by the man via a neck fracture. 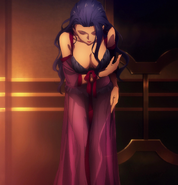 Lipia with Kirito and Quinella on an illustration from the If You Wish It side story. 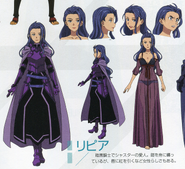 The concept arts for Lipia from SAO Magazine Vol. 10.