The name for this location is incorrectly translated as Lisbeth's Armory (Yen Press).

Volume 2, Warmth of the Heart Prologue

Lisbeth's Smith Shop (リズベット武具店, Rizubetto Bugu-ten?) is an armory shop in Lindarth on the 48th Floor of Aincrad. Lisbeth is the owner of the shop.

Lisbeth's Smith Shop is a small house, equipped with a waterwheel, for support-class use among the player-exclusive housing. There is a terrace at the front of the shop, where a rocking chair is situated. The interior of the shop is lined with weapons shown in display cases or hung on the wall. An NPC store-tender, named Hanna Heinemann,[1] stands behind a kiosk where players can make transactions, though Lisbeth can do the same.

A workshop is attached to the back of the shop, where the bellows, furnace, polisher, and anvil are located. In the anime, there was a corkboard where Lisbeth keeps her schedules and photos.

On the second floor, there are four rooms for a kitchen and the bedrooms.

Before Lisbeth bought this house, Lisbeth’s Smith Shop was merely a Vendor's Carpet on the street near an inn.[2]

One day, Lisbeth opened her shop after a cup of morning coffee. After allowing the players gathered outside for the store to open in, Lisbeth went into the workshop in the back to work on orders, after starting up all the appliances. As she was about to work on an order, Asuna burst into the workshop and startled Lisbeth. Asuna requested Lisbeth to sharpen her rapier. Lisbeth asked whether she did not have any guild activities that weekend, and Asuna replied that she was meeting up with someone that day. Lisbeth taunted Asuna about finally finding a boyfriend, though Asuna kept denying the claims. When Lisbeth finished polishing the blade, she threw it back to Asuna and told her to bring this person over with her. With that, Asuna left the shop. Lisbeth then wondered when her “«Fabulous Meeting» quest” would come to her. She then resumed her orders, though the thoughts lingered in her mind.

The next day, while Lisbeth was sleeping in the rocking chair on her terrace, she was approached by Kirito, who requested a custom-made sword. Kirito then showed Lisbeth the Elucidator and Lisbeth noted that it was actually a monster drop. Lisbeth showed him her best sword, forged from a speed-type material. Kirito then tested the sword for durability, and ended up breaking Lisbeth's sword. Angered at the destruction of her weapon, Lisbeth claimed that if she had the materials to forge a sword, it would easily break Kirito's Elucidator. Interested in such a claim, Kirito taunted her by saying that he would like such a sword, and the pair ended up forming a party. They then left for the West Mountain on the 55th Floor.

Two days later, after escaping the West Mountain, Kirito and Lisbeth returned to the Smith Shop to forge the sword with their newly acquired Crystallite Ingot. Lisbeth then started the forging, fueled by her feelings toward Kirito. The forging yielded Dark Repulser, which, after testing, Kirito stated was a good sword. Lisbeth inquired why Kirito needed a sword that resembled the stats of his Elucidator, and Kirito then demonstrated his Dual Blades skill. Kirito then asked Lisbeth to keep the skill a secret, who agreed to do so.

Kirito then asked for the price of the sword, to which Lisbeth replied that she would not need payment. Instead, she wanted to become Kirito's personal smith so that he would visit her everyday for her to perform maintenance on his equipment. Just as Lisbeth was going to finish her confession, Asuna once again burst into the workshop and gripped Lisbeth in a forceful hug and demanded an explanation for her disappearance

Lisbeth explained that she was stuck in a dungeon with Kirito, and Lisbeth finally realized that it was Asuna that recommended Kirito to her shop, and that Kirito was Asuna’s supposed "boyfriend”. After a few stammering words, Lisbeth pulled Asuna from the shop and to a sidewalk cafe to explain everything in detail. Later, after a meeting with Kirito, Lisbeth returned to her shop.

Sound of Water, Sound of HammerEdit

After three months of Kirito using the Dark Repulser, Lisbeth realized that the sword would eventually become less useful. As Kirito got to higher dungeons, he would be able to find a better sword from a rare drop. Plus, Dark Repulser had already used 42 of its 50 reinforcements, and was currently +39. That would mean that there were only 8 more chances for reinforcement, and Kirito had asked her to get the blade to +40 that day.

Lisbeth understood that Kirito had spent countless of hours hunting for the required materials (well over a hundred materials) so that he could continue to upgrade the sword. Kirito also mentioned at this time that he got his «Blackwyrm Coat» from a famous tailor in SAO, named Ashley. Lisbeth understood that when Kirito's sword is out of reinforcements, he might not come back to see her again. Seeing the worry on Lisbeth's face, Kirito told her that he had a hunch that he would defeat the final boss with Dark Repulser. It seemed only right, given the name of the sword. Filled with confidence, Lisbeth finished reinforcing the sword to +40. After saying that she did not think she could handle another stressful reinforcement like that, Kirito pulled out Elucidator and asked for it to be reinforced to +40 as well, and Lisbeth let out a long sigh.

On November 7 that year, Lisbeth had finished all of her orders by noon. She noted a photo hanging on the wall and recalled that it was taken in front of her shop when news of Asuna and Kirito's wedding reached her. A dinging sound invaded Lisbeth's reminisce, and she hurried outside where she found that all NPCs, including her store-tender, started disappearing. She looked up to find two lines, “Warning” and “System Announcement”. Finally, a voice announced that Sword Art Online was cleared on November 7, 2024, at 14:55 Aincrad Standard Time. Among the cheers of joy, Lisbeth shouted her love for Kirito into the sky.

The exterior of Lisbeth's house.

A view of the interior of Lisbeth's shop.

Lisbeth at her anvil.

Lisbeth at the polishers.

Another view of the interior of Lisbeth's shop.

The waterwheel of Lisbeth's shop.

Concept art of the interior of Lisbeth's smith shop from the Design Works art book. 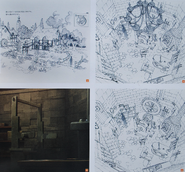 Concept art for the interior and exterior of Lisbeth's Smith Shop and the forge from Design Works art book.
Add a photo to this gallery