The «Magnatherium» (マグナテリウム, Magunateriumu?) is a rare monster found in the Bear Forest on the 4th Floor of Aincrad in Sword Art Online, which drops high-quality items needed for the Shipwright of Yore quest. The bear spawns near a tree with characteristic four-pronged claw marks on its trunk.[2]

The Magnatherium has gray hair, each of which is as thick as a needle, two red eyes that gleam in the dark, fierce fangs poking from its massive jaws, dagger-like claws protruding from its burly-as-log limbs, a barrel-size but still short and bearlike tail, and black, sharp, gleaming horns on its forehead. The beast is about eight metres tall when it stands on two legs and nearly four metres tall at the shoulder when it stands on all four.[2]

When a Magnatherium stands up vertically, sucks in air, and a red light flickers deep within its throat, it begins to use a fire breath attack. This attack can be avoided by running between the bear's legs to reach its backside or by jumping into a spring; however, the same spring cannot be used indefinitely, as a single fire breath attack produces enough heat to increase the temperature of a near-freezing spring to that of a hot bath. If there is a long enough distance to its targets, the bear begins advancing on all fours, suddenly lowers its horns and begins charging, following its prey until it hits either a large tree or its targets. It stops moving for about twenty-five seconds after a fire breath attack, and for about fifty seconds after a charge attack. At close range, the bear uses its dagger-like claws to attack the player.[2]

Having accepted the Shipwright of Yore quest, Asuna and Kirito came to the Bear Forest to gather bear fat for the quest. However, Asuna was determined to acquire the high-quality version of the bear fat; thus, they began looking for the territorial claw markings of the king of the bears. Eventually, Kirito noticed these markings on one of the trees; just as the two of them noticed that the markings were eight metres above the ground, a Magnatherium appeared. When the bear stood up vertically, Asuna and Kirito retreated behind a large tree, anticipating a charge attack. However, the bear was actually planning to use a fire breath attack, forcing Kirito and Asuna to jump backwards into a small but deep spring to avoid the attack. After the attack, Kirito suggested retreating for the time being; however, Asuna persuaded him to at least collect more information on the monster before doing so.

At that moment, the Magnatherium began charging towards Asuna and Kirito, easily crushing the large, old tree that they had hidden behind; however, the collision stopped the bear's attack and temporarily rendered it immobile. While considering their next course of action, Kirito noticed that the fallen tree trunk had not completely disappeared, implying that it could be a collectable game object. Upon asking Asuna to investigate it, Kirito lured the bear away and attempted to counter the bear's claw attack with «Slant» once it was a safe distance away from her. His strategy allowed him to remain standing despite the impact having smashed him into a tree.

When Kirito stepped forward, the bear stood up to use another fire breath attack; however, the swordsman was able to avoid the flames by running through the gap between its legs. Once he was behind the bear, Kirito made use of the fact that the bear was still occupied with its attack by unleashing «Sonic Leap» on its tail, which was about three metres above the ground. Suspecting that the logs Asuna had investigated would be required for a later part of the quest, the two of them repeatedly guided the bear to charge at large trees in order to obtain more logs.

When the pair no longer had free inventory space for more logs, Kirito suggested retreating to town, but Asuna reminded him that they still needed bear fat for the quest, and that she would not settle for ordinary bear fat. Thus, they began to actively attack the bear, which still had ninety percent of its hit points remaining. Kirito decided that he should use Sword Skills to deflect the bear's attacks, granting Asuna an opportunity to deal an attack. After a fifty-minute battle, the pair finally managed to defeat the Magnatherium, receiving various high-quality drop items as loot. 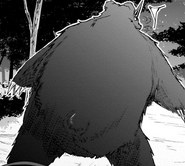 Magnatherium's backview.
Add a photo to this gallery

Retrieved from "https://swordartonline.fandom.com/wiki/Magnatherium?oldid=165089"
Community content is available under CC-BY-SA unless otherwise noted.