SII Episode 10 (cameo)
Musketeer X (, ?) is a minor character in the Phantom Bullet Arc. She is a «Gun Gale Online» player who participated in the 3rd Bullet of Bullets and was one of the four players in the finals of the tournament who had not been part of the finals during the previous two tournaments.

Musketeer is a female player with long, straight, white hair who only wears a dark bra, without anything on top of it, as well as red mini-skirt, a yellow scarf, a yellow glove on her right arm that extends slightly over the wrist and brown boots.[1] Additionally, Musketeer X wears a short, dark jacket with a large, red X on both of her shoulders.[1] She is armed with a «M14EBR»[2] (Mk 14 Enhanced Battle Rifle).

At some point before the 21:00 satellite scan during the 3rd Bullet of Bullets tournament, Musketeer X took up a sniping position on the west side of the stadium in the middle of the Lost City in ISL Ragnarok. Kirito and Sinon, who had mistakenly believed that Musketeer's X's name should be read as «Jūshi X» and thought that it was a coded name for Death Gun, noticed her position during the scan and thought that she was aiming to stun and kill Licoco with the Death Gun's pistol. Kirito and Sinon decided to split up, with Kirito attacking the player up close and Sinon providing covering fire via her sniper rifle. However, when Kirito got up to Musketeer X's position, he found out that they were mistaken after seeing that the player was actually a girl. Thinking that Sinon might have been under attack by the real Death Gun, Kirito forced his way to slash Musketeer X while she was introducing herself. Although Kirito was hit, he managed to defeat Musketeer X. After seeing that Sinon was lying on the floor, he took Musketeer X's battle rifle and smoke grenade, used the sniper to fire at Sterben, who was the real Death Gun, and threw a smoke grenade to provide cover for their escape.

Another screenshot of two angles, showing Musketeer X's avatar and a part of the gun. 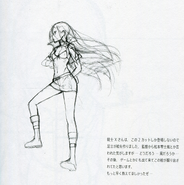