Sword Art Online Wiki
Register
Don't have an account?
Sign In
Advertisement
in: Pages to be adopted, Under Construction Articles, Characters,
and 3 more
English

Blacksmith (at the beginning of Rondo of a Fragile Blade)

Progressive Manga Chapter 008
Nezha (ネズハ, Nezuha?) is a supporting character in the Progressive series of the Aincrad Arc and one of the main characters of the Rondo of a Fragile Blade story. He is one of the 10,000 players who were trapped in Sword Art Online, where he was a member of the Legend Braves. He was the first player to ever open a player blacksmith shop in the game during its official service, but later abandoned his shop in favour of joining his friends in battle.

Nezha is short and squat, with a young honest face[1], appearing to be in his teens.[2] He has slightly drooping eyes and plain parted bangs, making him look like a perfectly typical crafter.[2] Kirito described Nezha's voice as young and boyish.[1]

During the 2nd Floor boss battle, Nezha wore a bronze breastplate, gauntlets of the same material, and an open-faced helmet. According to Kirito, his short, stocky build and round, dour face accentuated his image of a beardless dwarf.[3]

Three months prior to the opening of Sword Art Online, Nezha and five other players formed a guild named the Legend Braves to play another virtual reality game. However, due to suffering from a case of FullDive Non-Conformity (FNC) Nezha's ability to comprehend distances was impaired, and his lack of perspective subsequently prevented the team from reaching the top ranks. Nezha remained with the group as they had all agreed to move to Sword Art Online, a game that Nezha greatly wanted to play but was too anxious to play alone due to his FNC, when it was released. Thus, as an indirect appeal to them to let him stay with them, he changed his online name to the Western transliteration of Nataku, the name of a less obvious hero.[4]

As Blade Throwing was the only skill that allowed the use of projectile weaponry, Nezha hoped it would compensate for his depth perception impairment, enabling him to play as a fighter. However, despite his best efforts, he was unable to sufficiently level the skill for it to become an effective main weapon skill, while the attempts to help him had resulted in his friends having a slow start. Two weeks after the opening of Sword Art Online, he informed the group of his decision to abandon training his Blade Throwing skill in favor of becoming a blacksmith. As the situation grew tense, they approached by a player in a black poncho, who taught them a weapon-switching trick through the Enhancement System without requesting anything in return. Though Nezha and the other Legend Braves were initially hesitant on the idea, they were persuaded by the stranger's claim that the lack of rules against such an act meant that it was permissible.[4]

After the encounter, Nezha decided to follow the group in utilizing their new information, rather than continue slowing their progress. The first time he performed the scam, he immediately became remorseful but was unable to return the weapon or convince his teammates to discontinue their actions when he witnessed their enthusiasm over the success of their scheme.[4]

Rondo of a Fragile Blade[]

Around 15:00 on December 8, 2022, Nezha attempted to enhance Ryufior's «Anneal Blade +4», but failed four consecutive times. After passively accepting his client's outraged vituperation and timidly apologizing, he offered to buy the spent weapon for 8,000 Cor, a generous amount considering the inability to upgrade the sword any further. The offer was accepted by a stunned Ryufior and his friends.

Past 19:30 that evening, Nezha was visited by Asuna and Kirito, who wished to upgrade the accuracy of the former's Wind Fleuret. Receiving the rapier, as well as the maximum amount of materials for the upgrade, Nezha seemingly melded the materials with the blade in his portable furnace, then carefully hammered the sword on the anvil. However, on the tenth and last strike, the weapon completely and irreparably shattered.

The blacksmith and his clients remained motionless in shock for several seconds as the shards disappeared, after which Nezha stood and began profusely apologizing. When he offered to refund the enhancement fee, he was instead requested an explanation on the witnessed phenomenon, as weapon destruction was not a possible outcome of enhancing a weapon during the beta test. Nezha revealed that the destruction of the enhanced weapon may have been added as a possible penalty in the official service, as he had suffered the same incident before. After the explanation, Nezha offered an Iron Rapier as compensation for the lost weapon, or to at least refund the fee of his service, but both offers were rejected, thus he apologized once more as the two left.

Just a few moments past 20:00, Nezha closed his shop and carried his equipment to an inn, unaware that he was being followed by Kirito. After some hesitation, Nezha entered the inn, where he was greeted by the other members of the Legend Braves. Nezha reported the results of his business for the day but expressed his concern over their usage of the weapon enhancement scam, stating that continuing it would risk exposing them, while they had already made enough money to cover the cost. Unbeknownst to them, parts of their conversation had been overheard by Kirito. The Wind Fleuret disappeared from Nezha's inventory minutes later due to Kirito's intervention.

Following the defeat of the Bullbous Bow the next day on December 9, Nezha followed the Clearers to Taran. That night, after several successful services, he received a request from Shivata to enhance his Stout Brand's heaviness. Unaware that Kirito and Asuna were observing him, Nezha gathered upgrade materials from among his wares and tossed them into the furnace. At that moment, he used the Quick Change mod to swap Shivata's Stout Brand for a spent one. With the exchange only noticed by Asuna and Kirito, Nezha proceeded with the upgrade process, causing the weapon to shatter. Shortly after Shivata left, Nezha closed his shop at eight o' clock and dejectedly departed from the plaza.

Two days later on December 11, just before 20:00, Nezha was visited by Kirito, who was disguised in heavy plate armor, and was commissioned to upgrade his Anneal Blade's quickness. Upon receiving the sword, Nezha briefly admired its properties, before accepting payment for the materials. After using the Quick Change mod to secretly switch the weapon with a spent one the instant he tossed the materials into the forge, Nezha finished the upgrade process. When the sword irrevocably shattered, Nezha prepared to apologise but was stopped by Kirito, who revealed his identity and retrieved his sword using Quick Change.

Realizing that his scam had been exposed, Nezha revealed that most of the stolen weapons had already been converted into money. Thus, he planned to commit suicide, which he believed to be the only remaining method for atonement, but was stopped by the intervention of Asuna, who encouraged him to find his own reason to fight and reminded him of how he managed to leave the Town of Beginnings on his own.

After moving to a nearby house close to the plaza, Nezha elaborated on his FNC and his history with the Legend Braves. After revealing what led to the scam and the originator of the idea, Nezha was inquired of his level and skills. As he had no free skill slots, he was asked about his willingness to relinquish his blacksmith skill in favor of receiving a weapon he could use, a chakram, as well as directions to a quest for the skill needed to use the weapon. As he accepted the demands, Nezha was guided to the path to the quest area and left to finish the journey on his own.

Three days later, on December 14, Nezha completed the quest, gaining the Martial Arts skill, and thus immediately headed to join the Clearers for the boss raid. Just outside the entrance to the dungeon, he encountered Argo, who had just finished a questline that provided intel on a new Floor Boss added to the floor since the official release. As the info broker was unsure of her ability to travel through Labyrinth by herself, he assisted her in reaching the raid group by distracting and avoiding monsters along the way. The two managed to reach the boss room immediately prior to the appearance of Asterius the Taurus King. When the new boss was about to kill Lind and Kibaou, Nezha quickly threw his chakram at Asterius' weak point on his crown, thus interrupting the attack and drawing the boss' attention to himself. Nezha then kept the boss occupied for two minutes to allow the others to recover, using knowledge on its attack patterns to evade its attacks. After the other players returned to battle, he continued using the chakram to stagger and interrupt Asterius' breath attack for the rest of the fight.

After the defeat of the boss, Nezha was approached by Shivata, along with two other victims of the scam, who questioned him on his profession change and his chakram. No longer having any regrets, Nezha prostrated himself before them and confessed to stealing their weapons, taking the blame for the Legend Braves. After passively accepting the furious raid members' subsequent outrage, Nezha listened to the raid leader's proposal of reparations for his crimes. However, at that moment, Nezha was accused of indirectly killing one of his victims by depriving him of a sufficient weapon by a player from Kibaou's team. Unable to make amends for an alleged death, Nezha declared he would accept any punishment decided upon him, prompting the players to begin calling for his death. At that moment, Nezha was joined by the other Legend Braves, who disclosed their own roles in the scam. While they offered their equipment as amends for their misdeeds, Nezha wept with joy over his friends' assistance.

On December 31, 2022, Nezha was relic hunting with the other members of the Legend Braves in the underground catacombs dungeon beneath Karluin on the 5th Floor when he received a message from Kirito. Twenty minutes later, he was approached by the swordsman with a request to help him defeat the 5th Floor Boss that same day, much to his shock. As Kirito vouched for the importance of beating the boss before the main guilds could, Nezha agreed to lend his support for the cause. 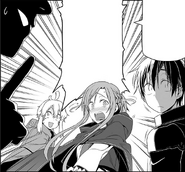 Nezha assuming that Asuna and Kirito are dating

Nezha revealing that Asuna's visit to Kirito's bath is well-known among players. 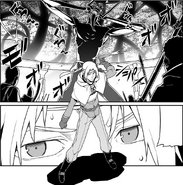 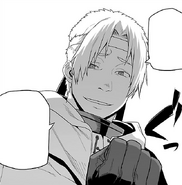 Nezha glad about fulfilling his dream