Episode 11 (Cameo)
Episode 13 (Actual Appearance)
Nishida (ニシダ, Nishida?) is one of the 10,000 players who were trapped in «Sword Art Online» and one of the oldest in the game. He is a fisherman in the game, but in reality, he works for «Tohto Broadband Connection», a network operator company that worked with Argus to check the network connecting for SAO. He was in charge of maintaining the network connection before being trapped in the game.

Nishida is an elderly man who appears to be in his 50s.[2] He wears a simple fisherman's outfit with a straw hat.[3] He also wears metal rimmed glasses.[2]

Nishida is a kind old man who loves to fish and is one of the few people who enjoyed living their lives in the virtual world of SAO.

Nishida was seen when Kirito carried Asuna past a lake on the 22nd Floor of Aincrad on his shoulders. Nishida at first looked confused, but then smiled and waved, resulting in Kirito rushing away from the scene.

Several days later, Kirito met Nishida after a failed attempt to fish at a lake. The elder talked with Kirito, and managed to catch a fish with ease while doing so, however he admitted that he could not cook it because of his low Cooking skill, and even if he could, he wanted to eat it with soy sauce, which he thought did not exist in the game. After inviting the elder to their new house, and enjoying the food (and the soy sauce) in the process, he told him that the lake Kirito had been fishing in had a local god. The local god made it almost impossible to catch fish in the lake with a low Fishing skill. Nishida also told Kirito that he himself had seen this fish before, but lacked the strength to pull it out, thus he asked if Kirito would like to help him in catching the fish. Kirito agreed to take up the challenge. A few days later, Nishida and Kirito went to the lake to fish for the local god while Asuna waited on the shore in a disguise. Nishida first gave the bait to the fish, then Kirito switched with him to use his strength to pull the god out of the water. Since the fish was actually a large monster and Kirito did not bring any weapons, this caused Asuna to kill the monster, revealing her identity as the sub-commander of the Knights of the Blood. Asuna received a rare fishing rod, a monster drop from the killed monster, that she gives to Nishida as a gift.

After learning that the two are actually clearers, he said goodbye to the two after they were called back when the location of the 75th Floor Labyrinth boss, The Skull Reaper, was discovered. Nishida was later logged out of the game, after Kirito defeated Heathcliff in a duel, prematurely ending the game. 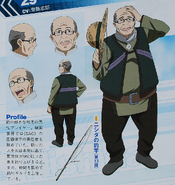 Nishida from the Anime Sword Art Online no Subete artbook.