Sword Art Online Wiki
Register
Don't have an account?
Sign In
Advertisement
in: Characters, Citations needed, Pages to be adopted,
and 4 more
English

Administrator redirects here. You may be looking for the anime episode with the same name.

Quinella (クィネラ, Kwinera?), also known as the self-proclaimed Administrator (アドミニストレータ, Adominisutorēta?), was the main antagonist of the first half of the Alicization Arc. She was the actual ruler of the Human Empire in Underworld as the highest minister of the Axiom Church. 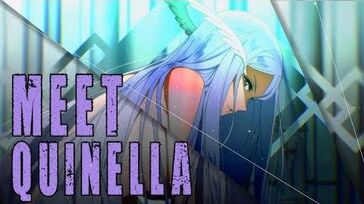 Quinella was an extremely beautiful woman with long silver hair, including eyelashes and eyebrows, which may appear blue or white depending on the surrounding lighting. Her eyes were silver in color, seemingly reflecting the seven prismatic colors. She was voluptuous, donned light clothes, which were hemmed with «Stacia Window»-silver threads, and had an unreservedly open neckline.[citation needed]

Quinella was born three hundred and fifty years before Kirito entered Underworld for the second time as the product of a political marriage between strong noble families at that time. Her father was the lord in charge of the town of Centoria, granting him the right to bestow Sacred Tasks. To maintain power in the family, the lord created a new Sacred Task named Sacred Arts Research to grant to his daughter.[citation needed]

Quinella discovered new Sacred Arts that the other Underworld Residents had not known. By studying the meanings of the words used in the commands, she was able to form the first offensive command, the «Thermal Arrow». With it, she discovered that killing any other living being would increase the person's stats, which led to her sneaking out of home every night to hunt nearby animals and thus improving her stats at an incredible rate.

Taking advantage of her knowledge, Quinella made people believe that she was gifted by gods, and took the opportunity to start creating the Central Cathedral, and with it, the Axiom Church. She created the Feudal System in Underworld by making the lords into nobles, thus creating a structure to control the entire Underworld. The restriction imposed by the Axiom Church on lowering the life stats of living beings was created by Quinella to prevent other humans from elevating their authority levels in the same way she did.

As Quinella's power grew, so did the tower in the Cathedral. From a certain point of time, she no longer showed herself to those of the world and immersed herself purely in the analysis of the Sacred Arts to transcend the ultimate limit set upon her, «Life». She became anxious because, despite all her power, her life continued to drop and there was nothing she could do about it, until one day, when she was on the brink of death, she managed to find a command that allowed her to see the list of all commands accessible in Underworld, at the bottom of which was one that raised her System Control Authority level to the maximum and granted herself the authorities that were reserved only for the Cardinal System, including terrain manipulation, item generation and even the manipulation of the durability of dynamic units, including humans.

Quinella immediately used her new powers to completely restore her own Life, halt its natural degeneration and recovered her former appearance from her years as a youth. However, Quinella was not yet satisfied. She could not permit the existence of one that had an authority level equal to hers - the Cardinal System. While recklessly trying to decipher the complex syntax of supervisor-level commands via a reference list created for Rath employees, she devised an extensive complicated command in hopes of stealing the powers of the Cardinal System. However, a single yet enormous error with reciting the command led to her burning the core principles of the Cardinal System onto her own Fluctlight.

Awakening only after an entire day of sleep after reciting the command, Quinella no longer aged or required eating or drinking; instead, however, she inherited a single desire from the Cardinal System — to regulate the world. This desire went beyond the Cardinal System's original purpose: Quinella desired to keep the Human Empire the same for eternity. To achieve this goal, she needed to take control of the most unpredictable factor of the world — the residents.

Quinella took various actions to restrain the lives of the residents. Firstly, she proclaimed a single edict to split the Human Empire into four empires and made the four great nobles of the age into the emperors of the new empires. She then used her supervisor powers to instantly create the «Immortal Wall» that separated the empires, thus creating a physical barrier that restricted the movement of the residents. She also created various other barriers in the more remote regions of the Human Empire where pioneers had founded new villages. These included physical barriers such as the Gigas Cedar, and psychological barriers such as the «Bells of Time Telling», which could only be heard within a certain range within a town or village.

Having realized that the sub-process had become a threat to her, Quinella sought for a way to keep it locked in within herself. Noticing that the sub-process could only take control of her body during times of emotional distress, Quinella decided to freeze her emotions to stay in control of her body at all times. By that point, she had been abducting Underworld residents who questioned the Taboo Index and the Axiom Church and using these captives as test subjects for experimenting with Fluctlight-altering commands called the «Synthesis Ritual». Through these inhumane experiments, she was able to test which part of the Fluctlight should be altered to change a person's memory, thought patterns, emotions etc. Having tested this ritual long enough, Quinella applied the ritual on herself and was successful in freezing most of the emotions that were the cause of her unrest: fear, anger, etc.

Approaching 150 years of age, Quinella noticed an anomaly within herself. Various incidents, from briefly losing her consciousness even outside of sleep to not being able to recall recent memories and even having trouble recalling the Sacred Art commands that she should have memorized perfectly, had been happening recurrently to her. Upon examining her own Fluctlight, Quinella was shocked to find out that the memory capacity of her Fluctlight had reached its limit without her knowledge. Because of this newfound limit on her existence which could not be controlled like Life, Quinella sought for a way to overcome it. In order to accomplish this, she devised a devious scheme for overcoming the memory limit on her Fluctlight by hijacking the Fluctlight of another person who had plenty of memory capacity to spare and using said victim's Fluctlight to store a backup of her compressed memories, before manipulating her own memories to free up more space on her own Fluctlight.

At the time, a 10-year old nun had been studying Sacred Arts on the lower levels of the Central Cathedral due to her above average System Control Authority. Quinella selected this nun to be the vessel for her backup memories, so she invited the nun to the top floor of the Cathedral. There, Quinella successfully overwrote the nun's Fluctlight with Quinella's own thought processes and memories. However, an unforeseen issue arose. After the Synthesis Ritual, which was used to copy Quinella's soul onto the nun's Fluctlight, was completed and the two females awoke at the same time, they came to the realization that they were identical beings, which caused both of their Fluctlights to start breaking down due to the shock caused by the realization.

However, the nun's Fluctlight was the first to break down, allowing Cardinal, the sub-process which was transferred to the nun's body in the process of the ritual, to take control of the nun's body. At that point, they recognized each other as the Administrator within Quinella's original body and the Cardinal's sub-process within the girl's body and this allowed their Fluctlights to stop breaking down.

At that moment, Cardinal seized the initiative and used high-level Sacred Arts against Quinella. The first attack landed magnificently at its target and a magnificent death match of immense lightning and whirlwinds, infernos and ice daggers unfolded. As both Quinella's and Cardinal's paces were exactly the same, Cardinal was winning the battle due to being the one who attacked first. As the battle was coming to its end, Quinella realized a decisive difference between her and Cardinal. She immediately chanted a command to turn one of the high-priority objects within the room into a weapon and then a command that prevented use of system commands within the room. Although Cardinal managed to generate a staff with the same priority as Quinella's sword, Cardinal was put at a disadvantage due to controlling a body that differed in size from the body she used to be contained in before. After two or three blows, Cardinal had to fall back. Quinella gave chase, however, Cardinal chanted the art that allowed her to retreat into the Great Library Room and lock the doors afterwards. As unlocking the door from the outside required a tedious ritual, Quinella was distracted long enough for Cardinal to finish chanting a command that destroyed the door just as it was unlocked.

Afterwards, Quinella had to resort to deleting her most recent peripheral memories to ensure she had at least a minimum of free memory capacity and began spending most of the day lying in bed with her eyes shut to minimize the amount of new memories recorded. Quinella also ensured guaranteed protection for herself by using the Synthesis Ritual on her former test subjects, people arrested for breaking the Taboo Index and, later, the winners of the Four Empires Unity Tournament, turning them into absolutely loyal Integrity Knights. From then on, having delegated most of her duties to her subordinates, Quinella would only rise from her bed at scheduled times to check on the management of the world.

At the end of a gruelling battle with Alice, Eugeo, and Kirito, Quinella suffered fatal injuries, and thus decided to preserve herself by leaving to the real world earlier than planned. With awkward steps, she reached the hidden console for communicating with the real world. After Quinella operated the keyboard to begin the procedure, a pillar of light appeared from beneath her feet and her body began rising. Just as she was about to finish her farewell to Kirito, she was shocked by the sudden intervention of Chudelkin, who set his body ablaze to reach her. With Quinella embraced by Chudelkin, the two were soon engulfed by the flame and perished.